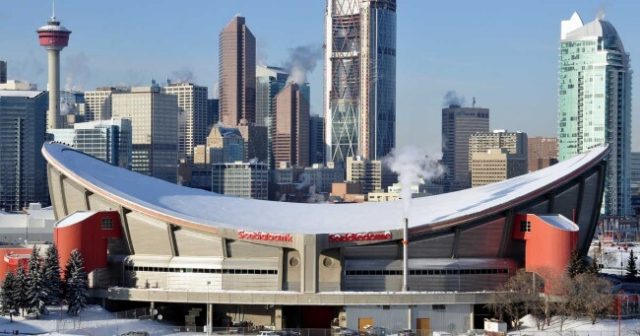 The City of Calgary has agreed to foot 50% of the $550 million bill involved in the construction of a new arena for the Calgary Flames. Calgary Flames ownership will be picking up the other half of the tab. The construction of a new home for Calgary has been on the cards for quite some time as the rapidly aging Scotiabank Saddledome was no longer a viable option. The discussions turned quite heated at a stage and a bone of contention between the city and the owners of the club.

Scotiabank Saddledome, a proud instalment in Calgary since 1983, will be demolished and a new arena erected on the same site. According to the provisions of the agreement between the city and the owners, the city will own 100% of the physical property and the Calgary Flames will foot the bill for 100% of the maintenance and repair costs, as well as insurance on the structure, etc. Calgary Sports and Entertainment Corp (CSEC – owners of the Calgary Flames) will obviously continue to enjoy the commercial perks of ownership.

The discussions spanned all of 14 months and eventually drew to an end on July 22 after a final three hours worth of deliberations behind closed doors. The decision has now been released to the public for further commentary. Should no major objections be received during the course of the week, a final vote will be cast on July 29th.

Calgary Mayor Naheed Nenshi said that when all is said and done, the deal is a very good one and by and large a win-win for the owners of the Flames. Nenshi, together with the CEO of Calgary Exhibition and Stampede Ltd., namely Warren Connel, CEO of CSEC, Ken King; and Michael Brown, a representative of the Calgary Municipal Land Corporation, revealed the outcome of the deliberations via a public announcement on Monday.

A previous deal was on the table in 2017 but was subsequently canned. The new deal is the result of many hours’ worth of hard work, revealed Nenshi. Nenshi also said that the crux of the matter and of the viability of the deal was all along connected to what the expectations were in terms of returns. Nenshi said that it was deemed important, and right from the start, that the deal should be approached in the most transparent manner possible.