Canadian Brooke Henderson has long known what was at stake at the most recent CP Women’s Open. The 20-year-old golfer from Smith Falls, Ontario was aware that her country had gone 45 years without a victory in the event, which was only compounded by the pressure of playing on local soil against some of the LPGA Tour’s strongest players. However, Henderson remained unfazed by all of this, playing aggressively from the beginning of Sunday’s final round and claiming a four-shot victory over America’s Angel Yin, winning the overall title. The Canadian pro finished 21-under par, becoming the second Canadian woman in history to win the tourney after Jocelyne Bourassa in 1973 and breaking the almost half-a-century long dry spell. A straight run of four consecutive birdies on the back nine created a strong lead for the player, who thoroughly enjoyed the walk up to No. 18 as the crowd cheered her on. After a hefty drive, Henderson’s 96-yard approach struck the green and landed right near the hole. She completed her 7-under-par 65 by hitting a three-foot birdie, leaving the gallery buzzing with excitement.

After winning the iconic event, Henderson raised her arms in pride as she hugged her sister, Brittany, who had been on her bag all week. Their father, Dave, also ran ecstatic onto the green, dousing the pair in champagne to celebrate the win. Even the crowd joined in, singing O’ Canada as Henderson was surrounded by family, friends and fellow golfers. According to the star golfer, ten minutes after she hit her second shot in on 18 when all the celebrations happened is a period of time that she will never forget. She shot 66 on the tourney’s first two days and a 70 on Saturday, finishing with 21-under 267. Runner up Yin had a 68, while US native Jennifer Song finished just six shots off the lead with 15-under. Hot on their heels were Australian players Minjee Lee with 68, and Su Oh with 69, both with seven strokes off the pace and tied for fourth place with Amy Yang (68) and Austin Ernest (69). 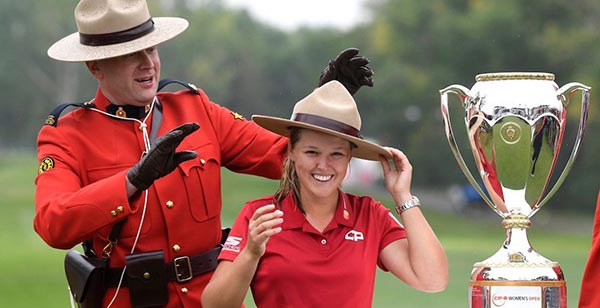 Henderson managed to earn a spectacular $337,500 US out of the $2.25-million purse for her second seasonal victory. The win also came as the seventh LPGA Tour victory for her, placing her just one spot behind Sandra Post’s record for all-time wins by a Canadian golfer. The player, who won last April across the ocean in Hawaii, has been in form during the past few months. She entered the CP Women’s Open with no less than three top-ten finishes over her past five starts, averaging 286 yards with her driver and leading all of her fellow players with 28 birdies in total. Canadian golf fans now look forward to seeing Henderson once more in the 2019 CP Women’s Open, which will take place at the Magna Golf Club in Aurora, Ontario next year. RELATED ARTICLES: Canadian Poker Pro Plays $20k A Hole Golf Dustin Johnson Claims 19th Golfing Career Victory Top-Earning Athletes Aged 25 or Younger