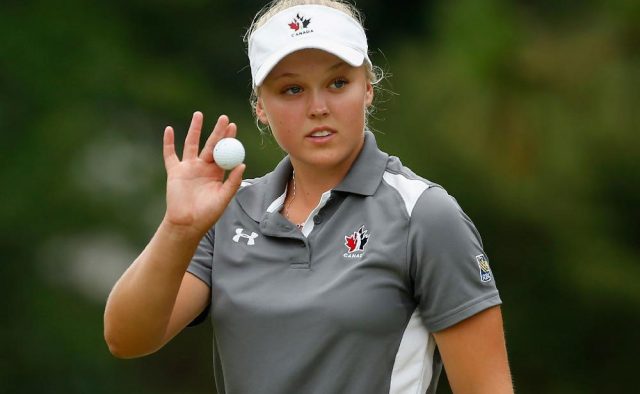 No matter where she goes nowadays, everybody recognizes Brooke Henderson. The 21 year old Smith Falls, Ontario native has rocketed her way up the international golf rankings over the past few years – but despite that, she is still insistent that her life has not changed much since becoming one of Canada’s biggest rising sports stars.

With no less than seven LPGA wins under her belt, Henderson entered 2019 being one victory away from the all-time win records of Canadian legends like Sandra Post, George Knudson, and Mike Weir.

In order to reach or beat that mark, the female athlete of the year for three years running according to the Canadian Press says that she is focused on keeping her average score below 70. Her average of 69.99 in 2018 was strong enough to reach fourth on tour, and should she meet her goal again this year, she is confident that everything else will fall naturally into place.

Hard at Work on Putting Skills

She has also revealed that her make-or-break factor will be her putting skills. This is the single area of her performance that has held her back in the past, but she has been hard at work with her father and coach Dave to improve her speeds. As she already has excellent pace on the greens, her putting will be the ultimate factor that could lead to her stardom this year.

Henderson also says that she has been working on her consistency in order to ensure that she’s ready for whatever 2019 throws her way. The even better news is that she feels like she is indeed ready now.

The young star golfer earned herself a pack of new fans at the 2018 CP Women’s Open in Regina, where she won by four shots and became the first female player in Canada to gain a win on home soil in the last 45 years. Just months later, she had also won the Lotte Championship over in Hawaii.

Speaking about her successes, Brooke has noted that she feels like she’ll be ‘in contention’ a lot of the time, which will hopefully lead to at least 1 win in 2019. However, she would love to maintain her streak of winning at least twice this year, as she has done consecutively in the past three years as well.

Canada’s top male golfer, Adam Hadwin, has called Henderson ‘a force’, and says that with her youth and talent, the world really is her oyster. Hadwin hopes that she will continue to enjoy the game and remains to be the ‘young, happy kid’ that she is today as she continues to grow from strength to strength. If she can achieve that, he says, she will have a very long – and very successful – career.