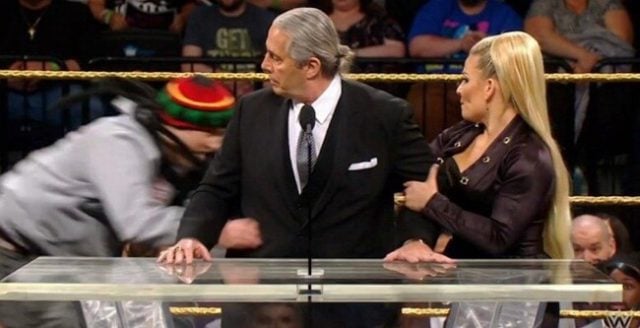 Whether it was out of anger or as a desperate attempt at short-lived fame, nobody knows for sure, but a ramped-up spectator made headlines on Saturday when he tackled Canadian wrestler Bret “The Hitman” Hart in Brooklyn, New York, at the time of Hart having been in the process of delivering his speech at the WWE Hall of Fame ceremony.

According to eyewitness reports, the spectator had unexpectedly appeared out of nowhere and had hurled himself at Hart quite unexpectedly, so much so that security had not seen any of it coming. But Hart came to no harm thanks to wrestlers in the audience having come to his aid almost instantly. With the attacker subdued, Hart was able to finish his speech in reasonably good spirits.

A Case of Bad Timing

Spectator Alan Fish saw the entire business go down, and said that the attacker should not have interfered with Hart at such a pivotal moment in the pro-wrestler’s life. The attacker was identified as the 26 year-old Zachary Madsen, who now faces assault criminal trespass charges. Madsen has not yet told his side of the story, due to there not yet having been available anyone from the District Attorney’s office to speak on his behalf.

Several onlookers promptly proceeded to eternalise the attack on camera and posted the incident to social media platforms shortly after. The heroes who had come to Hart’s aid were none other than Shane McMahon and Travis Brown. One of the two ended up punching Madsen in order to get him to calm down and step away.

Hart Wants Tribute To Be Remembered

Hart has since released a statement following the attack and has said that it had been a very wild weekend indeed but that he was happy to report that he was fine and not injured. He also said that if fans remembered only a single thing about the entire weekend, then it should be instead of focusing on the sensation of the attack, be Hart’s tribute to best friend and teammate, the late Jim “The Anvil” Neidhart.

Hart was mid-way through his tribute to Neidhart, and was being honoured for his role in the tag-team duo when the Madsen allegedly cleared a barricade and attacked. According to members of the police who had been involved with Madsen’s arrest, the 26 year-old did not offer much in the way of an explanation, save to say that the moment had felt “just right”.

Want to back your favourite wrestler? BET ON WRESTLING online!