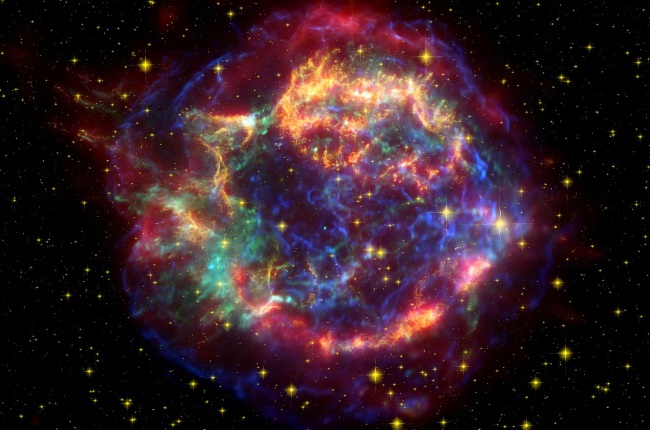 Scientists have just discovered the biggest supernova ever detected, and one radiating nearly five times the amount of explosion energy released by a typical supernova. This in itself is an unprecedented occurrence when considering that the amount of light radiated by a typical supernova is generally less than 1% of its total energy. The amazing discovery was made by scientists at the Center for Astrophysics, which is a scientific collaboration between the Harvard College Observatory and the Smithsonian Astrophysical Observatory.

Read More... How An NS Library Is Helping To Save Lives

The supernova in question, which has since the discovery of its original star back in 2016, been named SN2016, first drew the attention of scientists and astronomers because of its incredible size. After having observed and studied the explosion over the course of two years, scientists now estimate that the mass of SN2016 was anywhere between 50 and 100 times greater than our own sun.

Normal-sized supernovas, essentially referring to a stellar explosions, are nowhere near the size of SN2016 and those recorded have at most been 15 times greater than the sun.

What makes the discovery so very exciting to the world of science and nature astronomy, is that up until now, a stellar explosion the size of SN2016 has only ever been theorised. What’s more, supernovas offer a unique glance into the distant past, as the further away things are observed, the further back humanity gets to catch a glimpse of what used to be. Theoretically speaking, a supernova the size and appearance of SN2016, may in actual fact have originated very near the start of our universe. It’s not at all difficult to see then why the world of science and space is particularly excited about the latest discovery.

As to how the star that caused the gigantic supernova came to be, scientists can also only theorise about. A likely event would be that two individually huge stars may have merged into one around about a century before the explosion took place. This according to Matt Nicholl, who is an astrophysicist at England’s Birmingham University.

Nicholl and others are of the opinion that the supernova radiated energy that caused light so bright because a very powerful collision had taken place between the debris given off by the explosion, and an enveloping shell of gas that had been released by the star years before the explosion took place.

And since supernovas really do offer a very special glimpse into the past of our known universe, concluded Nicholl, who also happens to be the lead scientist who worked on studying the supernova, it’s great to now know what to look for.