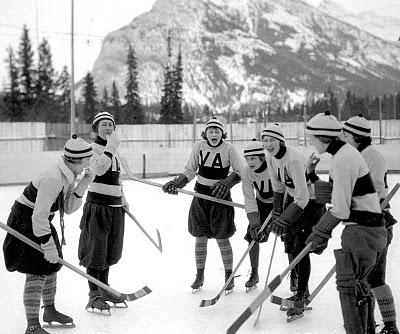 I know that the NBA and NHL playoffs are coming soon. I know that there are high hopes for the Blue Jays as the MLB season gets underway soon. I'll have something to say about the Raptors once the regular season ends. I'll write my impressions of the Maple Leaf's season when it ends. I'll discuss the Blue Jay's prospects when we know which "prospects" are being elevated to the big league roster.

Until then, I want to sing the praises of Canadian athletes who usually don't get their due in the hearts and minds of Canada's sports fans.

Chelsea Carey came back from a disappointing loss to Russia in the world championships by leading her team to a resounding 9-4 victory over Sweden. The loss to Russia was the team's first defeat in the tournament and the quick and decisive turnaround indicates that the setback against Russia was a fluke, a minor blip on Canada's march to a medal at the world championship.

In the loss to Russia, Carey made poor throws late in the match. In the follow-up win against Sweden she made a beautiful shot in the ninth end that got through two guarding rocks and scored a triple take out.

Curlers are Athletes in a Very Real Sense

We don't normally think of curlers as "athletes", certainly not when we talk about the constant speed of hockey, the elevation and power of basketball, or the split second finesse needed to play in baseball's top leagues.

But curling requires excellent eye-hand coordination and the ability to see far ahead whilst the rock is making its way to the target. The shooter must anticipate almost instantaneously what the thrown rock will do and shout clear instructions to her teammates to sweep the ice to aid the rock. So, whilst curlers don't run, jump, skate or demonstrate superhuman strength, they are certainly athletes and at the level of the world championships, they occupy a rarified space in the athletic world of curling.

Brianne Theisen-Eaton set a new Canadian record for points in a pentathlon tournament finishing with 4881 points and edging out Anastasiya Mokhnyuk of Ukraine to win the gold medal in the world indoor track and field tournament. Brianne needed to gain 10 seconds against her rival in the final 800-meter event and she did just that.

Brianne is now set to represent Canada at the Olympics this year. She will have quite a challenge to winning a medal at the Olympic Games because the Russians, who didn't attend the track and field tournament are very strong in the pentathlon and Mokhnyuk can be expected to come back extra determined after suffering this loss. As Chelsea Carey showed, top athletes often come back stronger than ever after a defeat.

Eugenie Bouchard is drawing some attention as a rising star in women's tennis. Eugenie is no stranger in the tennis world; she began playing at age five, seventeen years ago. Eugenie has never been the natural superstar like so many teen-age women, but she has improved her game constantly and now is being mentioned as a successor to the "ageing" stars such a Serena Williams.

Even if Eugenie never achieves the domination that Serena and other top women players have enjoyed, she is set for several years in which she will go deep in tournaments and may become a household name.

Speaking about young, up and coming athletes, fifteen year old midfielder, Alphonso Davies, has earned an eight-day tryout with the Canadian Under-20 Soccer Team. Davies' special skills have long been recognized by soccer insiders; he was a member of the Under-15 team and was set to join the Under-17 team. It would appear that young Alphonso's progress is faster than even experienced soccer people anticipated. Alphonso will accompany the Under-20 team for two friendlies in England this week and next.

The Great One is Betting on Australia

Wayne Gretzky has announced a barnstorming tour of Australia featuring NHL players. Gretzky is realistic enough to know that ice hockey will never replace the four favourite games played down under: rugby, cricket, soccer, and Australian Rules football, best known as footie. Gretzky compares the place of ice hockey in relation to the top four sports in Australia to the plight of the LA Kings who must compete with the Dodgers, Angels, and Lakers for the Southern California sports dollar.

Gretzky wishes to showcase hockey to a nation that is never cold enough for fathers to freeze a rink behind their house so their sons and daughters might practice skating and stick handling. Despite the obvious disadvantage hockey has in a warm weather country such as Australia, Gretzky sees a time when NHL teams might play some game there.

We speak so often about the top Canadian female athletes that it is high time the women were recognized for athletics managerial skill as well as for pure athletics.

Michele O'Keefe is the President and CEO of Basketball Canada. Yet, when she was the head coach of a club basketball team, referees would often approach her male assistant rather than her.

Chantal Petitclerc, the head of the Canadian Mission to the Rio Paralympics speaks in bittersweet tones about the improving conditions for Canadian women as managers and coaches, "â€¦women in sport have come such a long wayâ€¦ inspiring other women. But, we're still so far behind in women coachesâ€¦we still have a lot to do. But it's going in the right direction so that's good."

Canadian women have to travel a longer route to achieve high positions in management and coaching, because men are still considered qualified for such positions based on their athletic careers. Success as an athlete does not normally translate into success behind the scenes as exemplified by the small number of coaches who were great players.

Here's one observer's congratulations to the women who have already achieved high positions and are setting the stage for many women to follow in their footsteps.