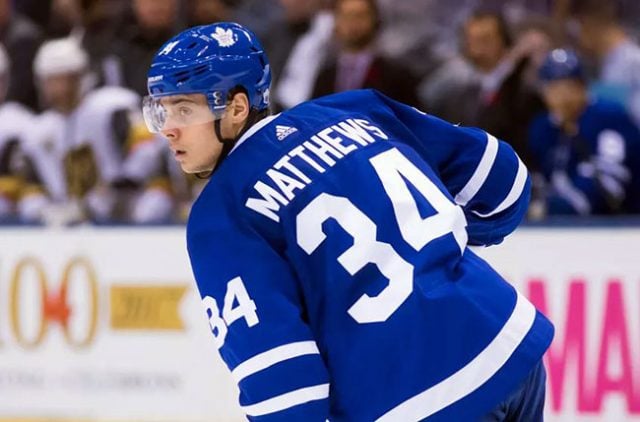 Star-center Auston Matthews says that he is proud to be a Maple Leaf. Matthews has just signed a 5-year extension contract with the team, just shy of his becoming a restricted free agent on July 1st. But listening to Matthews describe his teammates and playing in Toronto, it’s quite clear that for this player, remaining a Maple Leaf was a no brainer.

Matthews was drafted by the team back in 2016, and since then, only Alex Ovechkin has scored more goals per game when considering the statistics of a total of 50 games played. Toronto Leafs General Manager Kyle Dubas makes no secret of the fact that in the team’s inner ranks, Matthews is the bee’s knees. The star-center has been the face of the team ever since he was drafted for the first time.

Matthews Is A Happy Maple Leaf

According to Matthews, who is only now 21, being offered a 5-year extension is in many ways a dream come true. At the time of the announcement he spoke about the many joys and also the pressures associated with playing in hockey-mad Toronto.

He also commented on the fact that Toronto wanted badly for the Maple Leafs to bring the Stanley Cup home and said that if it was a champion team that the city called for, then that was exactly what it deserved to get.

On the financial side of things, the deal is worth an annual $11,634 million, of which most of the money will be received by Matthews in the form of signing bonuses. It’s quite obvious when listening to the player speak about the many special elements of being able to play hockey with the big guns, that he is everything but haughty. In fact, Matthews points out that growing up in Arizona, he never once dared to imagine that this would be the future that he would ultimately grow into.

As for Mitch Marner, his contract seems to be a done deal. Dubas has said in as many words that Marner will be playing for the Toronto Maple Leafs for a long time yet.

Want to bet on NHL games online?
Canada’s best sportsbooks are waiting for YOU!