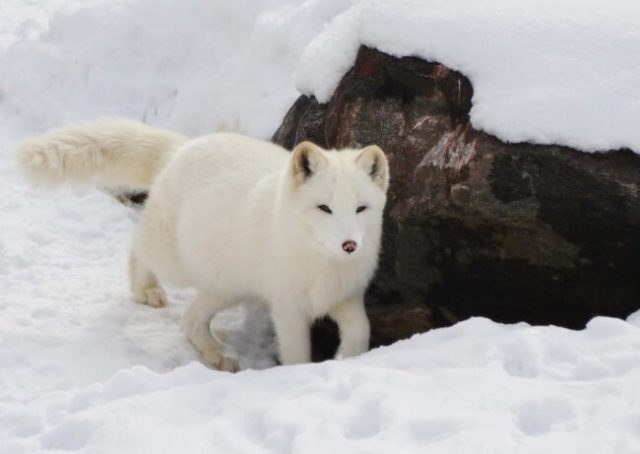 A feisty female arctic fox recently had researcher-scientist Arnaud Tarroux checking and rechecking everything from his tracker-tech to the actual data generated by the equipment. Neither Tarroux nor fellow researcher Eva Fuglei dared to believe what they were seeing because what the tracker had seemed to suggest was that the fox had made its way from Norway to Canada in less than 3 months’ time. That’s a total of 2,700 miles, to be exact.

But the device was working properly and the data turned out to be accurate. This became evident as the little fox kept making its way cross-country. The creature’s ongoing journey was earlier this year officially documented in a research paper; distances, days and other interesting details included, and makes for captivating reading. Some days saw distances of nearly 30 miles being travelled; on other days, the animal trekked distances closer to 100 miles. Despite its natural tenacity and ability to survive the harshest of temperatures, scientists all over the world now marvel at the extraordinary feat.

The Issue Of Speed

Scientists have for quite some time now been aware of the vast distances covered by some of the Animal Kingdom’s Northern Hemisphere residents. But what makes the arctic fox’s travels so very extraordinary is not so much the distances regularly travelled, but the speed at which those distances are travelled.

Also interesting is that the researchers had initially tracked 50 or 60 of the arctic foxes, also known as blue foxes or coastal foxes. Of all of the tracked animals, only a single fox stepped foot out of Norway. It isn’t certain why the animal would have veered from the beaten path but the assumption is that it was in all likelihood in search of food.

The whereabouts of the little creature is now no longer known as the tracker device stopped functioning somewhere in February. Nevertheless, the time spent travelling with a working tracking device has allowed scientists to document information that wasn’t previously considered to be cut and dry. In fact, Norwegian scientists have been speculating about the travelling habits of arctic and other indigenous fox species since the 1800s.

Future Travel Is In The Balance

An interesting but also concerning element of travel is the occurrence of sea ice. The presence of sea ice is crucial for travelling purposes. What with polar caps and coastal ice vanishing at alarming rates due to a global rise in temperature, the arctic fox may soon find itself completely isolated and unable to travel at all.

Be a WINNER. Play casino games online at YOUR convenience!