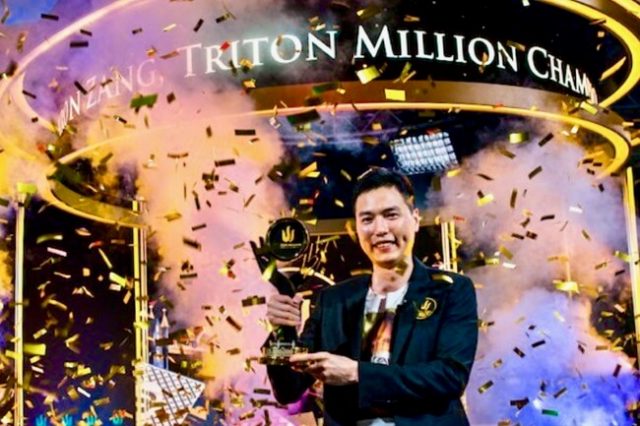 Triton London. Pokers very own big-name, big-prize, big-everything celebrity-style mega tournament event. Attracting the biggest names in Poker to the city that is home to more billionaires per capita than any other city in the world. $1.28 million gets you in, and if you’re really lucky, you may end up going home $20.5 million the richer without even having had to finish in 1st place. Or so went the story for 2nd-place finish and chip-leader Bryn Kennedy at least, having agreed to a chop with mega tournament winner Aaron Zang.

Saturday saw a field of 54 players battle it out in Triton London: A Helping Hand for Charity. The tournament each year offers the biggest prizes in tournament Poker and best of all is that its all for a really worthy cause.

Phua And Yong Had A Dream

Two high-stakes players from Malaysia founded Triton. But Paul Phua and Richard Yong have more in common than origin and Poker; they both have a heart for disadvantaged children living mainly in Hong Kong, and more specifically, the provision of medical services for the betterment of the lives of young children living in South East Asia. This year saw Triton London raise $2.7 million for the love and state of good health of children.

Phua, former bookie and junket operator, and Yong, current IT mogul and data miner, are no strangers to the high-stakes scene. The pair became household names in Poker circles and beyond, thanks to their having stood central to what the industry represented and hoped to achieve when cash Poker games first exploded onto the Macau-scene back in 2010.

And so naturally, Macau was where it all started for Triton.

It used to be a rather secretive affair, which in many ways boosted the general interest in the events through the roof. People just loved to speculate about and indulge in rumours of big-pot prize money; prize money running into the tens of millions.

And, of course, it turned out to be all true. Triton has toured all over Asia, and proved especially popular in Asian destinations like Hong Kong, Macau and South Korea. This year was the tour’s very first London stop, and only its second stop in Europe.

Poker, despite not being legal in the US digital space, is more alive and happening than ever before. And it’s doing its bit for those who need it the most.

Play Poker online. See if YOU can take home the pot today!