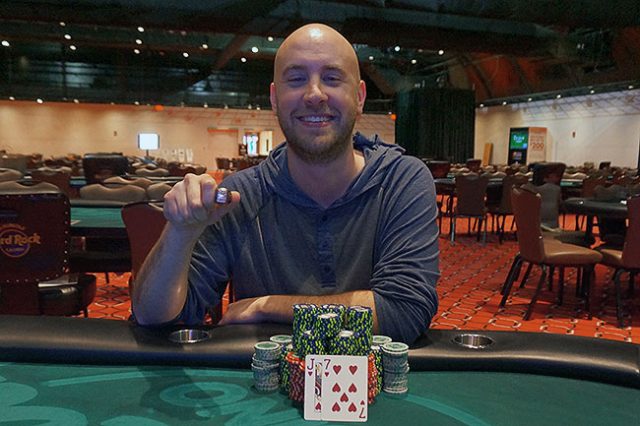 Zachary Donovan, 31 year old Poker-pro from Massachusetts, has won the 2019 World Series of Poker Circuit Seminole Casino Coconut Creek $1,700 main event. And if you thought that that was a mouth-full, consider the fact that the win saw Donovan leave the building with bulging pockets thanks to having won $246,916 in first-place prize money!

But it hasn’t been easiest of times for Zachary Donovan and his family. Donovan had initially decided to make the trip to South Florida in order to spend some quality time with his grandfather, who had been in poor health. The idea was to visit with his grandfather, and in the event that his health did in fact improve, to then participate in the tournament.

READ MORE: Get Ready For The Lex Live Spring Festival

Unfortunately Donovan’s grandfather had not been dealt with the best of cards in terms of his health. His condition deteriorated at an alarming rate, and as a result, he passed away on February 15th.  Quite understandably, Donovan was devastated by the loss of his grandfather, who had been one of his biggest supporters all throughout his Poker career.

The plan was to remain behind with his family in order to offer some condolence to them too, but they insisted that he was to participate in the tournament after all, as this was what his grandfather would have wanted him to do.

It was an emotional affair when Donovan spoke to reporters after the tournament. He said that it had been a privilege to be able to spend the last of his grandfather’s living days together as a family. He ended off by saying that he supposed that his grandfather had been right there beside him all along, because after all, they won.

Off To A Second-Chip Start

But that’s not to say that it had been a walk in the park! Donovan had, after a long and gruelling Poker battle, made it to the final day of the event in second chip position. He, along with 14 other players, were the only remaining ones hopeful of being crowned champion.

Our player scored his first knockout at the final table when he picked up and played pocket-kings. One thing led to another, and the next thing he knew, he was embroiled in a heads-up play with Sokchheka Pho. The going got tough and very competitive, with Pho even managing to steal away the lead from Donovan at one stage.

But Donovan, obviously eager to honor his grandfather’s memory, pushed through, and eventually laid out his claim to a second World Series of Poker golden bracelet.

We’re sure that his grandfather was very proud of him indeed!

Play with the pros online. Work your way to the top and WIN!