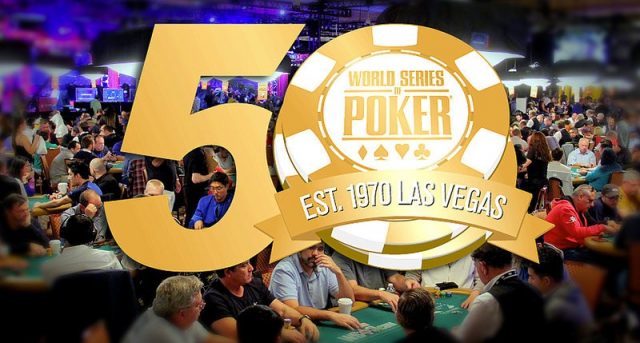 The World Series of Poker is celebrating 50 years in business, and the birthday celebrations have made the record books. The Big 50 event has been confirmed as having attracted more players to single live tournament than any other event in live tournament history. The field of players tallies an astounding 28,371; a number that beats the previous record for live tournament numbers that was achieved by The Colossus tournament back in 2015.

The celebrations and tournament went down at the Rio All Suite Hotel and Casino in Las Vegas and thanks to the massive field of entrants; the prize pool reached a massive and almost unbelievable $13,509,435.

For The Love Of The Game

According to WSOP Executive Director Ty Stewart, the numbers in attendance are a true testament of the love of the game by players all over the world. Stewart said that the WSOP was incredibly thankful to the players for having made its 50-year birthday celebration such a successful and wonderful affair and event.

Stewart reminisced about the fact that 50 years ago, the WSOP had a player base of only 6 players to start with. He said that the growth in popularity is something that is almost unheard of in any sector, let alone Poker. The WSOP, said Stewart, planned to continue to bring Poker to players all over the world and also to bring the best in live tournament experiences to those players.

The recent rejection of the revision of the controversial Wire Act by a federal judge is a real cause for celebration in the global Poker world. The DOJ hoped to revise and resurrect the wording of the act to include Poker and online casino games, but the judge has ruled that the Act, when dissecting it for its true intention in wording, refers only to electronic bets placed on sports.

The industry has had its fair share of ups and downs of late mainly due to the uncertainty created by the threats of a revised Wire Act. The process dragged on for months on end, and caused many businesses to refrain from getting anywhere near the gaming scene. Operators were left with many uncertainties to be concerned about, and it had escalated into a very unsavoury situation that affected all of Poker on a global level.

Thanks to the new ruling, Poker will continue to be played online in the US, and the WSOP has yet another reason to celebrate.

Celebrate YOUR wins online. Play Poker 24/7 and see if you can take home the pot.