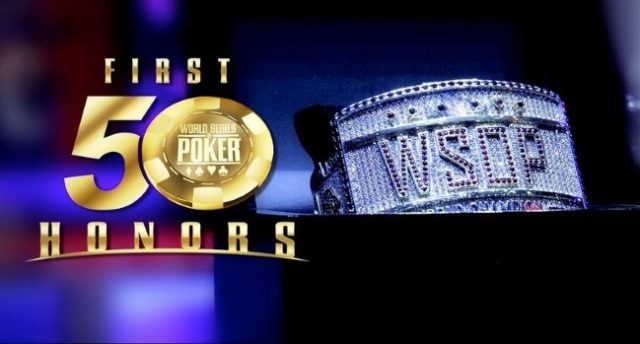 The World Series of Poker’s First Fifty Honours event celebrates Poker’s very best. The special celebration was hosted over the weekend and two of Poker’s very best were honoured for their service to the game. Daniel Negreanu and Chris Moneymaker really actually cleaned out the entire rift, having scooped up the bulk of the nominations.

The winners were nominated by the people of Poker themselves; the general public. Public nominations are considered to be the very best as there isn’t much room for any bias opinions or interferences. The people spoke and Canada’s Negreanu proved to be Mr. Popularity in the flesh. The Canadian star featured in three of the seven awards.

Negreanu managed to claim one of the most prestigious awards of them all, namely the Best Overall WSOP Performance award (during a single year). Despite the fact that that the Canadian had only managed to make it all the way to a final table in one Vegas-based competition, he did put up the stellar performance of having won two main events on two different continents.

The Canadian also won the Fan Favourite award, in addition to having been named one of the “Four Most Important Players in WSOP History”. This did not really come as a surprise to anyone. Negreanu is after all the holder of six gold bracelets, the winner of 121 cashes and $17.5 million the richer for it in career winnings.

Moneymaker Does His Thing

Chris Moneymaker wasn’t exactly left lagging behind. He won the award for “Most Memorable TV Hand” thanks to his smash-hit “Moneymaker Online Poker Boom” creation. In addition to this, he was named the man responsible for the “Most Impressive Main Event Win” in the last 50 years, following a landmark victory in 2013.

Fans also voted Moneymaker one of the “Four Most Important Players in WSOP History”. Moneymaker and Negreanu were joined in the awesome foursome league by legendary bad boy player Phil Hellmuth Jr. Not surprisingly, Phil was also the worthy recipient of the “Favourite Bad Boy” award.

The final addition to the fantastic four was Doyle Brunson, who also happens to be in possession of a total tally of 10 gold bracelets. The famous Godfather of Poker has earned career cash to the tune of $4.6 million as well as having racked up back-to-back main event wins.

Get ready to experience Poker like never before! Choose from TOP GAMES online.