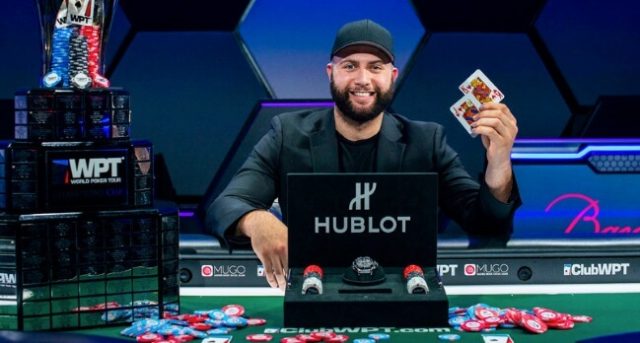 It’s a tournament that started out with 1,415 entries; with each player as hopeful and as determined as the next to make it to the final table. Last Wednesday, one month after the first of the cards were dealt, it was finally time for the final six to battle it out in the World Poker Tour Borgata Open final at the HyperX eSports Arena in Luxor, Las Vegas.

And what a final table it was for the tournament’s top 6! Ten hours and 236 gruelling hands later, it was Vinicius Lima, also known as “Viny”, who left the final table crowned the tournament’s winner. $728,430 in prize money, a limited edition Hublot Big Bang steel watch, and a $15,000 entry into the last-of-season Baccarat Crystal Tournament of Champions was Lima’s reward. And of course; and this goes without saying; a very good reason to boast.

Not A Day For Going Broke

24-year old Lima said after the game that the secret to the success of the day was that he had started out determined not to go broke. He put the win down to good energy and a lot of luck in keeping in the game.

Lima said that despite his sheer determination not to fall by the wayside, it remained an uphill battle. He seemed to think that a lot of his positive energy had much to do with the support that he had enjoyed throughout the tournament, and specifically also on the final day.

Referring to his friends and family, which included 2017 WSOP main event champion Scott Blumstein, Lima said that he had never before heard such a noisy bunch and that whether he had been in or out of a hand, they still cheered him on with much ado, noise and absolute fanfare.

Apart from the obvious pleasure of having won a WSOP final event, says Lima, the support that he received from his supporters had made the entire experience a thousand times better than what it would have been without his own crowd present.

In the end, after a number of jostles and extended no-flop runs, it the battle for the crown was between Lima and chip-leader Dave Farah. By the time it was down to the final pair, Farah had a chip advantage over Lima yet, but after a 46-hand run, it was Lima holding on to king-jack of hearts. It was close but no cigar for Farah, and a platinum win for the 24-year old Lima.

Near needless to say, Lima’s latest was also his career best.

Got a winning hand? Play Poker online and scoop a BIG win!