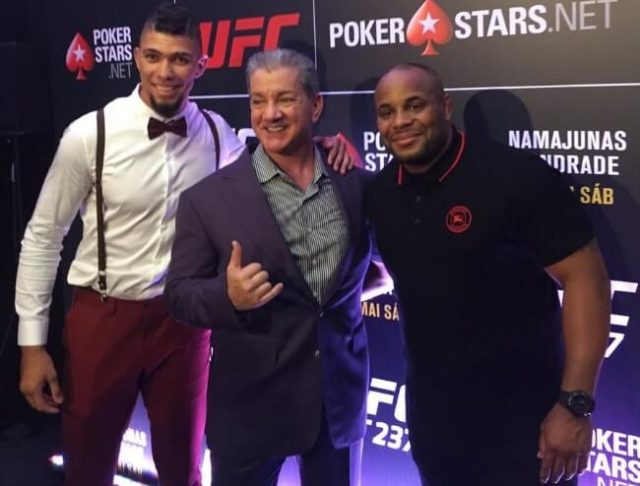 Can PokerStars possibly get any better at what they have been doing up until now? Room for improvement seems to be a many-splendid thing that reveals itself in fresh new ways to the relentlessly committed. When PokerStars’ partnership with the UFC (Ultimate Fighting Championship) first made casino news headlines in December that was pretty much assumed to have been it. Because really, what more could any fan of the big clobber possibly ask for? Fight-night around the table didn’t get any better than that. And yet, there was more to come; because apparently, there always is.

The star-collab has announced that three UFC brand-ambassadors have agreed to double up as PokerStars Ambassadors. The esteemed trio are: Bruce Buffer, heavyweight champ Daniel Cormier and the no. 12th-ranked light heavyweight fighter-champion Johnny Walker. The new brand ambassadors were officially introduced to the general public as such in Brazil during a press conference ahead of UFC®237: NAMAJUMAS vs. ANDRADE. Quite befittingly to the occasion, Brazil just happens to be the original place of birth of the Ultimate Fighting Championship.

Well-known South American PokerStars ambassador Andre Akkari did the honours of making the announcement and welcoming the three to the team. Akkari said that the initiative was all about affording fans of Poker and fans of UFC more opportunities to cross-engage, and that it was an honour for the operator to enjoy associations with three of the world’s most accomplished and celebrated fighters and athletes.

The Stars Group spared no expense in creating the perfect forerunner and build-up in the days leading up to the announcement. This included having mandated local Brazilian sand sculpture artist Jair Damasceno to create a life-sized statue of Anderson Silva and Johnny Walker engaging in a game, made entirely out of sand. The statue was on display at the Jeunesse Arena, where the fight was held and the press announcement was made.

Bruce Buffer is considered to be a natural connection between the UFC and the world of Poker. Buffer is one of the best-known UFC announcers in the world and is well known for his love of Poker too; being a long-time player.

Buffer described the partnership between PokerStars and the UFC as the ultimate coming together of two of his biggest passions. He said that he counted himself lucky indeed to be involved as official ambassador.