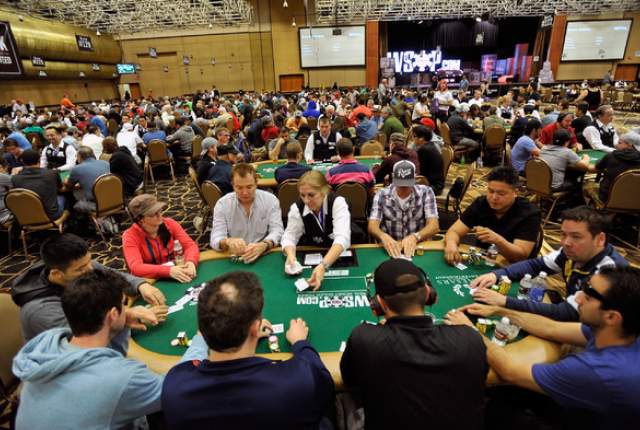 Toronto native Sam Greenwood has become the first Canadian to win a Gold Bracelet in the 2015 World Series of Poker. He did it with a spectacular win in Event #22 of the 2015 WSOP, the No-Limit Hold'em Tournament at the Rio Hotel and Casino in Las Vegas. Along with the bracelet, Sam won the first-place tournament prize of USD $318,977.

The three-day poker tournament started on Tuesday with 1,915 serious poker players who had each paid the $1,000 buy-in and received 5,000 in Tournament Chips to start out with. By the end of Day One, after eleven hours of play, 208 players remained. Kyle White of Surrey, British Columbia, was leader of the pack, with 184,900 in chips. Nacho Barbero was a close second with 175,600, and Talesh Patel was in third place with 158,500. Sam Greenwood was among the first-day leaders with a chip count of 107,700.

Day Two started on Wednesday at 1:00 PM with 208 players competing for the 198 prizes allotted by the tournament rules. By 2:30 there were 199 players remaining, and shortly before 3:00, James Gilbert and Chris Back, playing at different tables, were eliminated simultaneously and therefore got to share the final prize of $1,947.

It was getting close to midnight when first-day leader Kyle White was eliminated in 39th place. Play continued until 2:25 in the morning, at which point 22 players remained in contention, led by Jay Dragland of Calgary with 946,000 in chips, followed by James Dorrance with 812,000 and Sean Rice with 808,000. Sam Greenwood closed out the day with a respectable 272,000.

Day Three started at 1:00 on Thursday with 22 players in the tournament. First to be eliminated was Robert Willems, who held a pair of queens but lost to James Dorrance's pair of aces. Jeffrey Mulder of Red Deer County, Alberta, was next to go, followed by Carlos Colon and Paul Darden. That left 18 players seated around two tables. At that point in the tournament, James Dorrance was the leader with a chip count of 1,620,000, with Jay Dragland in second place with 1,300,000 and Robert Hsu in third with 785,000. Sam Greenwood was in tenth place with 404,000 in chips.

At 3:40, after the field had been further narrowed down to 11 players, Sam Greenwood won a huge pot with a pair of 10s and, with a chip count of 2.05 million, moved into the chip lead for the first time in the tournament. Angel Farrington and Genae Eddington were both eliminated by 5:00, leaving an all-male final table of nine players. At that point, Greenwood was still in the lead with 2.05 million in chips, James Dorrance was in second place with 1.7 million, and John Myung was in third with 1.1 million.

Jay Dragland was the first to be eliminated from final-table play, going out on Hand #23 at 6:50 to win the 9th place prize. At 8:00, Cole Jackson took over the chip lead with a pair of aces on Hand #43 and soon afterwards, on Hand #50, Jackson went all in with a pair of queens to win a huge pot while eliminating Robert Hsu. By the time the dinner break came around at 8:20, seven players remained at the table. Cole Jackson was way out in front with 3.29 million in chips, Sean Rice was a distant second with 1.61 million, and Ken Weinstein was in third with 1.44 million. Sam Greenwood was in 6th place with a chip count of 745,000.

Exciting poker action continued into the evening. Aaron Belardo was eliminated on Hand #60, Sean Rice on Hand #66, John Myung on Hand #72, James Dorrance on Hand #82, and Ken Weinstein on Hand #91. That left Cole Jackson and Sam Greenwood alive for Heads Up play, commencing at 11:14 PM. Greenwood entered the Heads Up tournament with a chip count of 5.2 million, Jackson with 4.5 million.

Cole Jackson won the first five hands of Heads Up poker to go into a big lead, after Hand #96, of 6.3 million to 3.2 million. But after Hand #105, in which Greenwood went all in and won with a pair of Kings, the positions were reversed: 6.3 million for Greenwood, 3.2 million for Jackson. By Hand #113, Greenwood had increased his lead to 7.1 million to 2.4 million, and on Hand #117 it was all over.

Hand #117 was played at half past midnight. Greenwood had a jack and a 6; Jackson an ace and a 10. A flop of 2-6-6 gave Greenwood three of a kind. With the call and the river adding nothing of value, and with Jackson betting all he had, Cole Jackson took the 2nd place prize of $197,254 and Sam Greenwood was the tournament champion.

A Poker Enthusiast and a Gracious Champion

With his victory, Sam Greenwood won a prize of $318,977 along with his first World Series of Poker gold bracelet and became the first Canadian to win a bracelet in the 2015 WSOP. Even with this amazing accomplishment, Greenwood eschews the title of "poker pro" and prefers to call himself a "poker enthusiast." After receiving his championship bracelet, he said, "I really wouldn't call myself a poker pro. I'm not really sure what I am or what I want to do. I just hope poker gives me enough of a steady income to do something later on." At 26 years of age, Sam Greenwood is a gracious champion and the pride of his native Toronto.