Tiger Woods Fails To Make The Cut At Own Poker Event 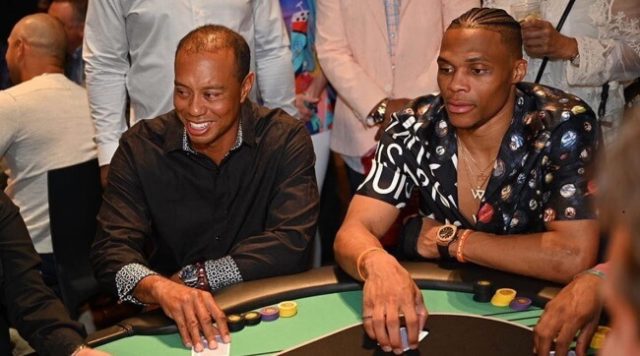 If Poker is a lot like golf, then let it be known that Tiger Woods is the exception in every way. The world’s most popular card game shares a number of qualities with golf. Much like swinging away with the old stick and ball, in Poker, it’s possible to be the top of the world (and your game for that matter) the one moment, and the next moment, its sudden death at your doorstep. But with all of that having been proved to be true, you’d really expect Tiger Woods to put up a similar performance in Poker as in the recent Masters, especially since the event in question was called “Tiger Jam”.

Its A No-Go This Time Round

Despite Woods obvious tendency to err on the side of “what the hell went wrong” in life; even more so than in golf; he did manage to save himself in most glorious fashion at this year’s US Masters. Woods made the type of comeback that is regarded as being an anomaly in pro-sports. It’s just a pity that Saturday night didn’t prove to be more of the same.

And really, it’s not even as if it started out poorly for Woods. The handsome host found himself embroiled in a final hand against Westbrook, with both players having been pretty much all in even before the dealer did a flop. The golfer had in his corner the advantage of an Ace of Spades. Naturally, when the dealer finally did the flop, and the first card that happened to come into view as another Ace, Woods had pre-empted a cause for celebration.

Westbrook however, already with two Queens in hand, got his third of a kind on the next flop, deflating that old familiar Tiger-pride in grandiose fashion.

Despite a shot of really bad luck, the pro-golfer did appear to at least enjoy his evening out on Vegas-town. It just goes to show yet again that Poker is no respecter of persons. The only thing that remains now is to hope that Tiger’s luck improves before the time comes to take on the many challenges of Pebble Beach.

Play the best Poker games online. Sign up and try for the WINNING hand.