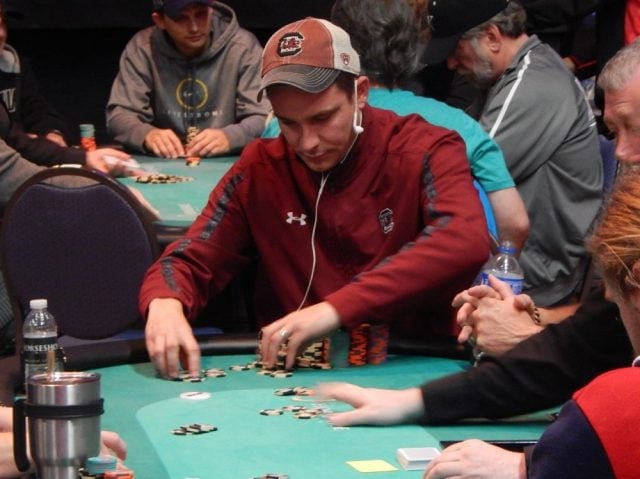 The 152 entrants generated a prize pool worth $50,160, and the top 18 finishers all shared in the spoils. Cash prizes started from $673 for the lower level winners of the final group of 18.

Some of the tournament’s top players were seated at the final table of ten, of which Sullivan had, at one point, become the unofficial leader. The top three players at the table were Michael Monaghan (415,000 in chips), Braden Robinson (280,000), and of course Sullivan (461,000 in chips). Joseph Hebert wasn’t too far behind, coming in with a short stack of 89,000 in chips.

Battling It Out With Herbert

Herbert may have entered the final table drawing on the shortest end of the straw, but he soon upped his game and became the new table leader. Sullivan, on the other hand, at quite a few stages did not fare so well at all. In fact, thanks to having played a couple of very dangerous hands, he faced elimination on more than one occasion.

Ultimately, it all boiled down to a situation of Herbert vs. Sullivan. Sullivan’s resolve to not give up was almost tangible. A very risky all-in confrontation ultimately ensued, and from then on out, there was no stopping Sullivan. He had clearly gained the necessary momentum that he felt he needed to catapult him all the way to the win. His new-found confidence turned out to be the ultimate thorn in his opponent’s shoe and when the final hand was eventually played, Herbert had no other option but to settle for a $8,370 second place prize.

Sullivan had much to celebrate, having won his first gold ring back in January of 2017 at the $365 No-Limit Hold’em 30-Minute levels event at Horseshoe Tunica for $20,018. Despite having been at it all day, Sullivan remained in good cheer and spoke excitedly to WSOP staff about how it was an amazing feeling to have had the opportunity to play at a final table again.

Hopefully this will not have been Sullivan’s last final table. We’re quite sure that somewhere along the line, his third WSOP gold ring awaits.

Have YOU got what it takes to win big at the tables? Play Poker online NOW!