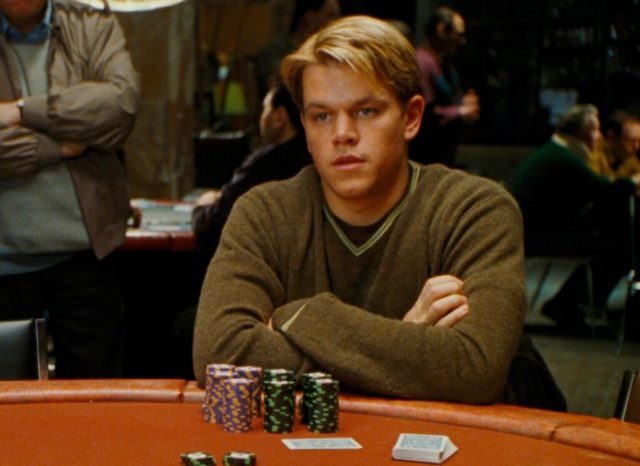 Matt Damon did not only learn to play Poker for his role in the 1998 cult movie Rounders – he learned to cheat at it, too. Former co-star Edward Norton spilled the beans in an interview in which he also told how he and Damon thrashed the film’s producers in a game.

According to Norton’s interview with the Ringer, the pair had really done their homework in preparation for their roles as two friends who get involved in the murky world of underground high-stakes games run by mobsters. Not only did they learn the ins and outs of the game, they also learned the bluffs, cheats, and signals of partner Poker.

To put their new skills to the test, the actors sat down with Bob and Harvey Weinstein for a game the night before they started filming. While playing, they signaled the values of their cards to one another by placing hold chips on them in different positions. Norton inflated bets and then folded once he knew the value of Damon’s hand – and it worked. The pair gave the Weinstein’s a ride they aren’t likely to forget.

Movie’s Impact On the Game

At the time of its release, Rounders received a lukewarm response from critics, and an equally tepid one from theater audiences. Despite this, it has gained cult status among Poker players, and is credited as partly inspiring the game’s popularity boom in the 2000s.

Some professional players have even said the movie was the reason they learned to play. Among them were Dutch Boyd, Gavin Griffin, Hevad Kahn, and Brian Rast.

Directed by John Dahl, Rounders follows Damon’s character Mike McDermott and Norton’s Lester Worm Murphy into underground Poker games in Atlantic City, New York, and Las Vegas. McDermott, a law student who believes in playing straight, loses a massive bankroll to Teddy KGB in his quest to get to the World Series.

Traumatized by the experience, he renounces the game to focus on his studies, but the release of his old friend Murphy from prison sets in motion a chain of events that eventually brings them face-to-face with the Russian mobster played by John Malkovich. It all comes to a head in a heads-up, no-limit Texas Hold’em game that threatens to put McDermott in an even worse position several times, until KGB’s quirky tell enables him to renew his dreams of playing – and winning – the World Series of Poker.

Do YOU want to win big with Poker? Play now and take the pot!