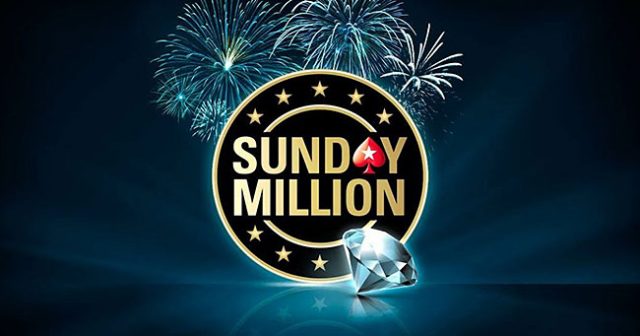 On January 20, the UK’s ‘PokerDave476’ and Canadian streamer Parker ‘tonkaaaa’ Talbot managed to get the PokerStars Sunday Million into the bag. It could well be the last time that the renowned online poker tourney was played using a buy-in of $215, as Canada-based PokerStars has now revealed that the tournament’s buy-in will stand at $109 from hereon out.

As announced on the brand’s blog, the world’s largest online card gaming room has made it known that all other features of the Sunday Million will remain unchanged. The starting time is still 6pm UTC, and late registration will still open for three hours and fifteen minutes on the dot.

Blind levels will also stay 12 minutes in duration for the first ten levels, and 15 minutes for every level thereafter. Likewise, starting stacks will stay at 10,000 per player with a first blind level of 25/50 and a 5-ante.

$1m Prize to Remain the Same

Just as importantly, the Sunday Million will be keeping the iconic $1,000,000 prize pool mentioned in its name. In order for the tournament to meet its guarantee at the $215 point, at least 5,000 entries were required. For the $109 buy-in, on the other hand, at least 10,000 entries are needed in order for PokerStars to avoid overlay.

With a $15 rake imposed at the $215 buy-in, the rake total for the weekly online tourney stood at $75,000. However, at the new entry rate, the event will make a far greater $90,000 in rake each and every week, as long as it attracts enough participants.

No further announcements have arisen regarding the payout structure of the event. It is still to be seen what the first place cash prize for the Sunday Million will be, although it has been speculated that this windfall will remain similar in value to those awarded in previous editions of the event.

According to a post on the PokerStars Blog, this change has been made in players’ favor. The brand says that it wants to open online poker’s ‘flagship event’ to more players than ever before, and the lower buy-in will do exactly that. At the same time, it will also ensure that the Million, affectionately nicknamed ‘Milly’, will remain to be the Sunday major tourney that every card aficionado wants to win.

The Million has run every week since March 5, 2006. Player ‘aaaaaaa’ bested a field of 5,893 players to claim $173,843.50 from the first prize pool of $1,178,600, becoming the first in history to win the legendary tournament. Many well-known grinders have since gone on to win the event in its 13 year history, including Jesper ‘KipsterDK’ Hougaard; Dan ‘Danny98765’ Smith; Nick ‘caecilius’ Petrangelo; Tobias ‘PokerNoob999’ Reinkemeier; Paul ‘paulgees81’ Volpe; Johan ‘busto_soon’ van Til; and Yevgeniy ‘Jovial Gent’ Timoshenko.