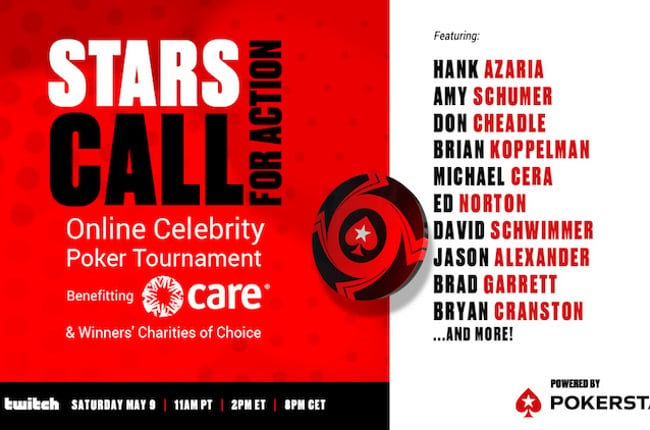 PokerStars is doing more than just its bit for relieving the plight of those affected by the current global calamity. The operator has announced the launch of a special charity initiative called “Stars Call for Action – Powered by PokerStars” – a celebrity-studded event that will strive to raise as much money as possible in aid of various critical relief efforts.

The online charity Poker event will be broadcast on various streaming platforms, including YouTube, Facebook and of course, Twitch. Hosted by PokerStars, the special event will be presented by prominent Poker celebs Lex Veldhuis and James Hartigan and promises to be a celebrity-style entertainment celebration. Viewers will in addition to enjoying premium content be given the opportunity to make a real difference by donating to the cause. Donations will be made by clicking on special donation-buttons to be implemented by each of the mentioned streaming platforms.

In return for their support, viewers will be treated to a friendly game played among superstar friends. Celebrities confirmed to be joining in the Poker fun include David Schwimmer, Edward Norton, Amy Schumer, Michael Cera, Jeff Garlin, Jason Alexander, Jon Hamm, Eric Bogosian, Michael Ian Blak, Kevin Pollak, Bryan Cranson, and apparently many more others too.

The idea behind the event belongs to the creative genius that is Hank Azaria, along with famous author and screenwriter Andy Bellin, and according to Azaria, was born from a place of the pair having wanted to remind folks of how life used to be before disaster struck and also of a place that humanity may eventually be able to return home to. It’s obviously also a pretty fun way of combining giving to those in need with engaging socially whilst remaining home, concluded the popular Hollywood actor.

As for the types of contributions that can be expected to be generated by the initiative, the expectation is that at least $1 million will be raised in paid out in “prize money”. But instead of those ending up in leading positions pocketing their share of the prize money, all of the proceeds will be noted in equal parts to a charity of a celebrity’s choosing and charity organisation Care International. The $1 million prize pool has been donated to the initiative by PokerStars.

Exciting for players at home is that PokerStars has hinted at creating the opportunity to play along with the stars. The initiative is, after all, all about inviting people to participate actively by doing good unto others.

Play POKER online. Join in the fun and see if you can WIN!