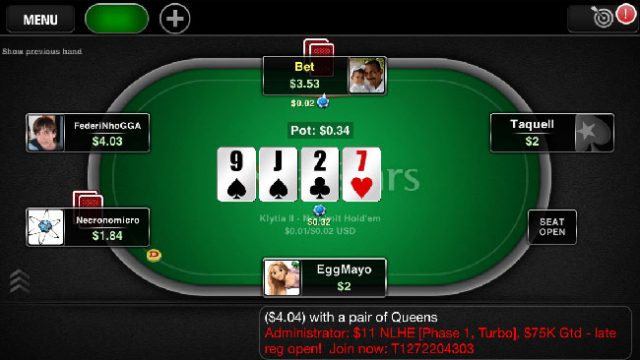 Cash poker players at PokerStars, the world’s largest card gaming room operated by Canadian giant The Stars Group, will soon no longer be able to use automated seating scripts. The changes will be enacted from March 1 onward following changes to the company’s third party tools and services policies.

Some cash players use third-party software called seating scripts when they settle down for an online wagering session. Numerous versions of these scripts exist, and each one of them works a little differently although their core principles are all the same. The automated script software scans game tables at each online poker website, like PokerStars, and finds the ideal seat for a player to grab according to their personal preferences.

Once the ideal seat has been found, players will be seated therein to avoid the stronger contenders at the table and instead target the lesser skilled players. Once they have been seated, players using seating scripts will hit their target as soon as they sit, potential increasing their own win rates at the expense of others’.

Major Changes on the Table

According to a PokerStars spokesperson, a few major changes are now in the pipeline for the operator’s policies. One of these changes will be the prohibition of any service or tool for “table selection efficiency” that filters available games or automates the process of joining available tables based on opponents’ gameplay stats.

Giving an example, the spokesperson said that the use of seating scripts that seat players at a set number of tables that have an average opponent statistic above or below a certain level (or use pre-assigned player notes to do so) will be prohibited.

While PokerStars has not yet officially confirmed these changes or their date of implementation, a seating script software supplier has recently noted on a game forum that they have been sent a 40 page document from the company. In this document, it is reportedly stated that March 1 is the date on which automated scripts will be banned from the planet’s most successful poker room.

Another supplier, NEED4SEAT, has stated on their website that from March 1 this year, PokerStars will be changing its third party tool and services policy. The document sent to software suppliers via email allegedly outlines the brand’s upcoming changes that will “effect some utility tools, HUDs and seating scripts” from the aforementioned date.

The same document also mentioned some of the new rules that players at the site will need to follow. In the simplified words of NEED4SEAT, any software that “simplifies” a user’s table selection based on data about individuals at that table will be strictly prohibited.

Some script engineers have already started working to develop ways around the upcoming changes so that their software is compatible with the brand’s new rules. In NEED4SEAT’s case, PokerStars’ Game Integrity Team has already approved their proposed changes.

Want to play a hand or two? Discover just how good Poker can be ONLINE!