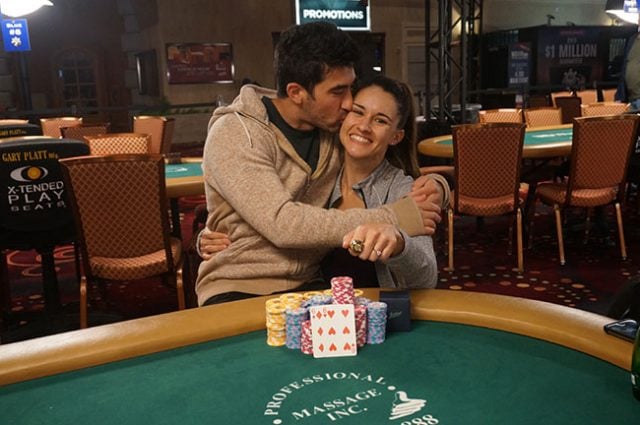 Engaged 02 play a mean hand of Poker. Both Sylvia and Sleeth achieved great success a week apart at the Rio All-Suite Hotel and Casino and the Venetian respectively, with both venues situated in Las Vegas where the World Series of Poker Circuit and the DeepStack Extravaganza I series was being battled out.

First for the win was Sleeth, who describes feeling awesome after coming out on top at the WSOP Circuit Rio Event #6, securing first-place prize money to the tune of $17,586 as well as WSOP gold ring. We can’t help but wonder how Poker’s coveted gold ring measured up to the one offered by Sylvia when he proposed!

The win itself marks the second largest victory of Sleeth’s career, and pushes her lifetime pro-Poker earnings all the way up to the $198,669 mark.

Over at the Venetian, it was Sylvia’s turn to bask in the glory of yet another win. The Venetian’s Deep Stack Extravaganza I series was wrapped up over the weekend, and the main event, event #42, had managed to attract a total of 797 hopefuls. The $1 million guarantee appears to have done the trick. The guarantee ensures that players finishing up in the top 81 positions all go home with their share of a whopping $1,143,695 in prize money.

The final table was no floppy affair, with the likes of James Carroll, Barry Hutter, Joey Weissman, and of course our man Sylvia, the runner-up in the 2012 WSOP main event. In the end, it was Sylvia and Carroll who had gone head to head, and the duo to an even division of the prize money. One final hand of cards was dealt to determine the ultimate victor of the event, and it was Sylvia’s final pair of eights that put the matter to bed on Carroll.

In the end, Jesse Sylvia and James Carroll each walked away $184,707 the richer and it’s safe to assume that Sylvia and other half Ashley Sleeth will this time round be all too happy to tell the story of what exactly had happened in Vegas!

The couple are regulars on the pro-Poker scene, and Sleeth in particular, has no intention of leaving the circuit tables anytime soon. After the win, she energetically proclaimed that at the moment, she was really into tournaments and very excited about it too.