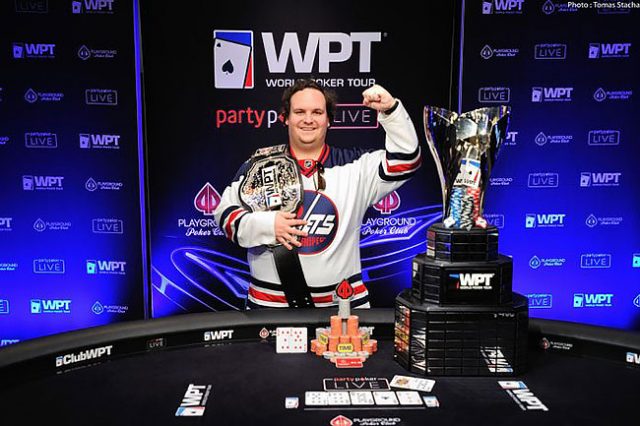 The winner of the 2018 World Poker Tour Montreal $5,300 buy-in, No-Limit Hold’em Main Event has emerged! Patrick Serda, a 28-year-old poker professional hailing from Canada, managed to best a field of 792 entries to secure his first ever WPT winning title and an immense top prize of CAD$855,000.

Serda headed into the final day of the tournament as the clear chip leader, with just six players left in the running. He had plenty of fierce competition to face at this table, including two-time WSOP bracelet winner Upeshka De Silva, and Sorel Mizzi, Canada’s fourth-highest earning live tournament regular with $12.1 million under his belt. Also at the final battle was Ema Zajmovic, the 2017 WPT Playground Winter Poker Festival main event winner and first female WPT ME champion in the world.

Six Pros Battle it Out for Glory

The first elimination of the evening came as a three-way all in. Jiachen Gong put his chips in pre-flop with A-A up against Kauvsegan Ehamparam’s A-K and Zajmovic’s A-Q. Four spades were put into the mix to make the nut flush and secure the hefty pot, eliminating Gong in sixth place. De Silva hit the rail next after running pocket fours into Mizzi’s pocket jacks.

At that point, Mizzi, Serda and Zajmovic all had roughly the same amount in chips at the beginning of four-handed play. Zajmovic managed to bust Ehamparam in a respectable fourth place, while Mizzi, on the other hand, started to fall behind, and eventually left in third place at his fourth final table in a WPT event.

Both players checked, and Serda checked again while his competitor bet 3,000,000. He then made the call and his 3 completed the board on the river, then checked again as Zajmovic moved all-in. Serda fell into the tank, but his third pair saved the day as Zajmovic could only show king high and a missed straight flush. This resulted in her falling short of becoming the first-ever two-time WPT female ME winner and taking home $424,893, while Serda reigned victorious.

For his astounding win, Serda received US$668,388 (CAD$855,000), as mentioned above, along with 1,824 Card Player Player of the Year Points. This was the new dad’s third final table appearance of the year, and his huge win propelled him into 71st place on the overall POY race ranking charts.

Are you looking to win BIG or just have some fun? Play your hand online at top Poker sites!