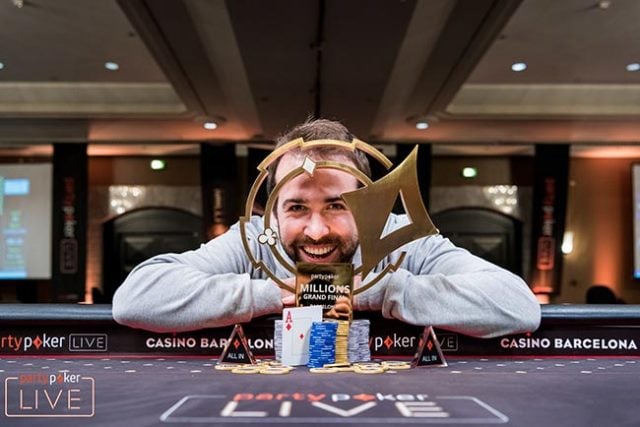 Despite challenges with Spanish tax authorities making many attendees rethink their participation, this year’s partypoker LIVE MILLIONS Grand Final Barcelona Main Event was still a roaring success. This year, it was pro player Pascal Lefrancois who walked away victorious, winning an unbelievable €1,700,000 and the grand winner’s trophy for his remarkable performance.

The event’s final results have been revealed at long last, listing many circuit regulars among some new names as well. In first place, as mentioned above, is Canada’s own Lefrancois, claiming almost €2 million in cash for his efforts. He was closely followed by UK-based Adam Owen in second place, who bagged an equally impressive €1,300,000 for his enviable finish.

Next up in third place was another British poker icon, Stephen Chidwick. Chidwick once again played admirably all the way to the final round, claiming a cool €1,000,000 from the prize pot at Barcelona’s busiest gaming festival this year. He, in turn, was followed by Germany’s Dominik Nitsche, who played his way to a cash of €800,000 and brought pride to his nation.

Speaking of German players, another German name also appeared on the list’s fifth place slot this year. Local legend Jan-Eric Schwippert managed to claim €602,500 for narrowly losing to Nitsche, while also out-playing Portugal’s Diogo Veiga. Veiga walked away with a respectable €450,000 and the sixth place title.

Last on the list of Grand Final Main Event winners were two Belgian icons: Davidi Kitai and Thomas Boivin. Kitai came in seventh place and grabbed a total of €325,000 from this year’s prize pool, while Boivin completed the list of victors with eighth place and a win of €225,000 to take home.

A grand total of 1,175 participants signed up to play in the 2018 partypoker LIVE MILLIONS Grand Final Barcelona Main Event, bringing with them masses of charisma, experience and incredible skill to create what was a truly unforgettable poker event. Between them, these players also created a guaranteed prize pool of over €11,397,500 – one of the highest the event has seen in its history so far.

However, it is Canada’s Lefrancois who carries the pride of the ultimate win this year. The 37-year-old Montreal native (@Pass_Lefrancois on Twitter) boasts $5,160,341 in live tournament winnings to date, including his largest-ever cash of $2,097,211 for the 2018 Barcelona tourney. Other past victories for the player include a first place finish in the 2016 partypoker C$ 10,000 + 400 No Limit Hold’em – High Roller event, and a second place finish during the same event two years prior.