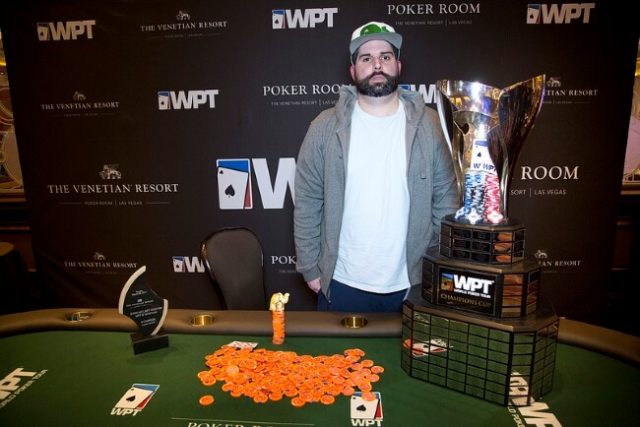 Palmer is a regular player at the Venetian and has a list of winnings as long as anyone’s arm at the venue; with the win being the biggest of all on the now 89-item strong list of victories. His previous Poker personal best happened in 2008, when he won the 2008 Festa Al Lago Classic. That time round saw him pocket $189,975.

Thanks to his latest victory, Palmer has also been awarded a free-entry pass into the Baccarat Crystal Tournament of Champions, a prize worth a sterling $15,000.

By Day 4 of the tournament, the 35 year old was seated at the head of a table of 9 remaining players. Three needed to bite the dust, so that the final table of 6 could finally battle it out for the top money and the bragging rights. Sean Yu, Skip Wilson and Jay Farber turned out to be the unlucky trio.

In the end, it was Palmer vs. Tony Gargano. The final spat turned into the longest of the season so far, as confirmed by the WPT. The pair managed to beat Jason Brin’s victory after 284 hands of gruelling concentration in Season XIV of the World Poker Tour Choctaw. Clawing all the way to the top only to be met by a rush of new adrenaline and sheer determination on the opposite side of the table is no easy feat.

But all’s well that ends well, and that it certainly did for Palmer. Winning any inaugural host’s event is a special occasion and means instant long-term recognition. The Venetian will no doubt engrave Palmer’s name on something, somewhere.

The fact that he is a celebrated player at the venue really does add something to the experience and it’s no surprise that this is what seemed to stand out most of all for the Poker pro. It’s a bit like the Leafs winning in Toronto.

Play Poker like a pro ONLINE! Find tables to suit your budget 24/7.