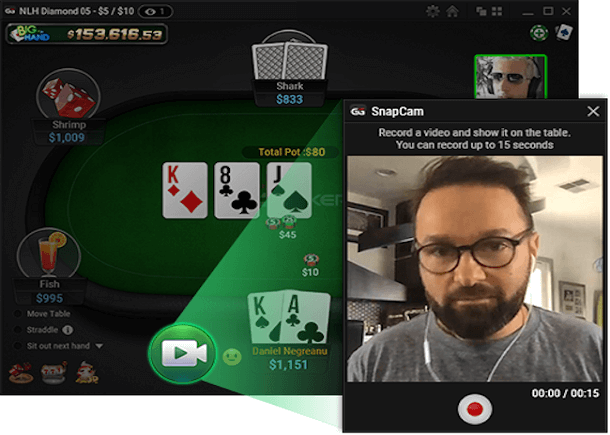 Despite the ever-increasing popularity of online Poker, players can often be heard bemoaning the fact that online, when compared to live, in-person Poker, tends to be experienced as somewhat of an impersonal affair. Which is exactly what GGPoker’s new SnapCam feature hopes to change about playing online.

With GGPoker’s new SnapCam feature, players will now be able to record videos of up to 15 seconds long per video by making use of their own personal webcams. The recorded footage can then be shared with everyone around the virtual table. This will in essence allow online players to share with their fellow-players exactly how they feel and also how they are experiencing the interaction – in full video and audio.

GGPoker has however cautioned players about the sharing of offensive content when sharing footage via SnapCam. Offensive and forbidden content includes content of a sexist or racist nature, as well as the online harassment of other players. Those found guilty of having abused the new feature will reportedly be banned from making use of it in future.

Players seated at a single virtual table will reportedly be able to share up to four SnapCam videos at any particular time. The moment more than four videos are being sent simultaneously, any videos exceeding the 4-video-limit will be made to wait in a queue for future transmission.

Those not keen on the new feature will be permitted to mute their chat function. This will essentially disable the feature for as long as the function remains muted. Players will also be in a position to mute video footage from certain fellow-players only.

GGPoker’s newest feature is one mostly welcomed in terms of it being geared towards attracting more recreational players to the game. Casual players often cite feeling concerned about the anonymity-factor as their number one reason for not sticking with playing online Poker in the long run. Being able to “see” other players, even only occasionally and in the form of 15-second-long video clips, should go a long way towards mitigating concerns about the impersonal nature of online Poker.

Recreational players have also at times been picked on by professional players looking to make a quick buck off their inexperience. Being able to, at least occasionally, see who it is that happens to be seated on the other side of the table should allow players to feel more at ease about the nature of their opponents.