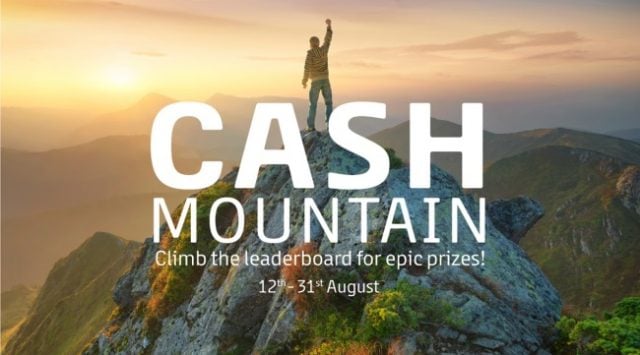 Eager to make the final warm days of summer last? Microgaming’s Poker Network (MPN) is too. The casino giant has just announced its second cash game leaderboard promotion for the year and its all about a race to the summit and making the most of the sunshine on the way. MPN’s Cash Mountain promotion will officially get underway on August 12. By the time August 31st has rolled on by, 15 lucky players will have staked their claim to massive leaderboard cash prizes. The total of the leaderboard prizes up for grabs is a colossal €20,000 and counting!

The promotional period will be divided into three stages, confirmed MPN in its official promo-announcement. The first will run from 12 – 16 August, the second from 19 – 23 August, and the third and final stage will run from 26 – 30 August.

Read More… What The Rules Really Say About Chip Counts

The top five players on the leaderboard in each of the 3 stages will be given the opportunity to choose 1 of 3 special promo leaderboard prizes. The prizes are: a €750 in cash, a live Poker event package valued at €1,500, and an online tournament package to the value of €1,550.

Some qualifying conditions apply. Players wanting to reach the summit and walk away with one of the three stunning prizes on offer will be required to have played at least 2,500 hands at a wager value of €0.50 or higher. Also, in order to qualify for any of the three prizes on offer, players will have to have competed in each of the three stages.

It’s A Win Even When Losing

Leaderboard winners will be those who did manage to accumulate the most points thanks to big blind boosts won at every qualifying wager-level. Working on a points basis makes it to be a completely fair process.

Best of all is that nobody on team MPN is ever deemed a loser and no amount of time spent playing Poker is time wasted. Thanks to Microgaming, its all superbly good fun. Those players who play more than 100 hands, and at minimum stakes of €0.05 / €0.10 per hand, will be entered into the special Daily Run Bad Flip Freeroll event, to commence at 8pm on the following day. The top 10 to finish the event will each be rewarded with a €50 bonus cash prize.

Be a WINNER! Play Poker online at Canada’s TOP sites.