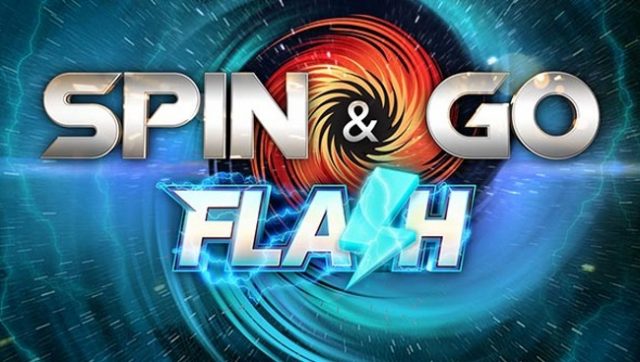 Consider yourself to be “faster than the speed of light”? Then be sure to move closer and listen up because PokerStars has just launched their new Spin & Go Flash tournaments. It’s not all that different from the typical Sit & Go variety; with the main difference being that it’s a great deal faster in terms of rapid progression.

But why the haste? According to the operator, the new faster format is being rolled out in order to attract more recreational players. Rec players are generally more keen to sign on for a quick bash and gorge on the table rather than hanging around hours on end not yet convinced that Poker is actually a thing they’re willing to step into. Smaller starting stacks and rapidly escalated blinds ramp up the pace rather tremendously. In other words, falling in love with Poker is now instant instead of long-broiled.

Quick On The Draw

It’s not as if the online Poker wheel was completely re-invented either. It’s all still being presented from the court of a single lobby. The only difference is that instead of clicking on “Play Now” players also have the option to select “Play Flash”.

That’s about it on the “what’s changed?” front. All of the rest is basically the same. Three Hand is still at thing and the prize pool is still selected completely at random by the little spinning pointer located in the middle of the table. The average prize pool remains pretty much fixed at 3 times any given buy-in. There are happy exceptions of course but generally speaking, when looking for a bit of high-stakes excitement, be sure to sniff out larger buy-in opportunities as the size of the buy-ins obviously affect the size of the prize pools.

No Need To Think Here!

The new format serves another purpose in favour of players just starting out on their own personal Poker journey. The much quicker format ensures that experienced players aren’t able to cash in on years’ worth of polished personal strategies. The pace is very much geared towards recreational players in that the playing field in terms of having time to mull decision around in one’s head is significantly limited.

This is of course great news for those who don’t yet have all that much to mull about and think upon. PokerStars isn’t the only operator to have implemented certain changes in order to create a fair and open playing field for inexperienced players. This is regarded by the industry as an attempt to attract a new wave of support to the game.

Win BIG in a flash! Join in the FUN and play real money POKER online.