Over in Australia at the Deaf Poker Australia (DPA) Championships, it was Alisha Wormald who managed to best a field of 114 players to win the Main Event hosted at the Crown Melbourne.

Deaf Poker Australia is now in its tenth year of celebrating and supporting ‘deaf culture’ and the identity of deaf people through poker, the world’s most popular card game. Earlier this month, Wormald became the event’s latest champ, bringing both pride and awareness to a cause very dear to her heart.

The event included a $250 buy-in Main Event and a special team event, consisting of eight players in total, called the DPA State of Origin. This event is now in its fifth consecutive year, costing $700 to enter and attracting a record ten entries this year. Entrants included the Northern Rivers defending champions who went head to head against teams from Queensland, South Australia, Victoria, Western Australia and New Zealand.

Top Win for Auckland in DPASO

Northern Rivers managed to capture fourth place in the event, while Victoria claimed third and won $1,000. New South Wales faced a 2-1 deficit in chips heads up, and got the last of their money in with a Jack-four result on a board that read ten-nine-Jack-Queen. Unfortunately for NSW, however, Auckland revealed a King-deuce for the straight, winning the top title and a prize of $2,500.

This is the first time that the DPA State of Origin shield, ‘Betsy’, traveled out of its native Australia and over the ocean to New Zealand. In the meantime, NSW collected $1,500 for their second place finish. The winning team consisted of members Robert Cairns, Ben Clifford, Krista Clifford, Michael Granger, Eric Coppage, Michael Heuberger, Chris Blum and Rhian Yates. 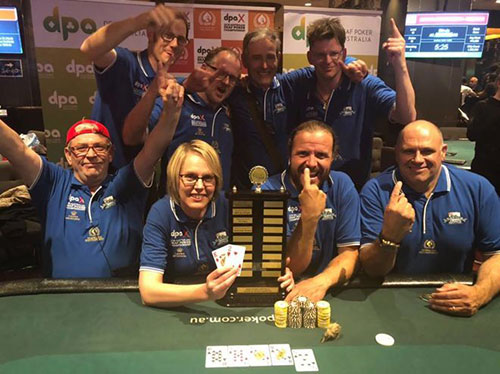 Co-branded under the name of the 2018 International Deaf Poker Federation (IDPF) World Championship, the $250 buy-in Main Event attracted 114 entrants and a prize pool of $22,800 that was shared among the top 15 victors. Following Wormald’s first place win was Daryl Jordan from NSW in second place, winning AU$3,990, with Rino Spadea in third with $2,620 in winnings.

In fourth place came Matthew Hayman, who pocketed $2,050 for his efforts, followed by Michael Lockrey with $1,595. Mark Theodossiou coined sixth place and a win of $1,375, narrowly beating New Zealand’s Caleb Thorn, who came in at seventh and won $1,140. Heading up the pack were Rena Muscat of Queensland and Chris Blum of New Zealand, who took home $915 and $685, respectively.