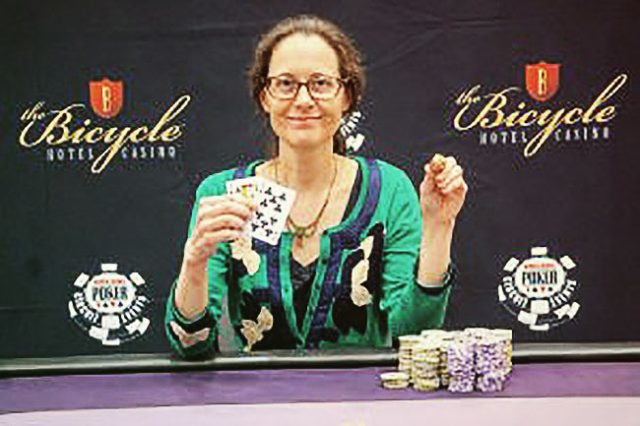 For Los Angeles-based video editor by day, Nancy Matson, entering the World Series of Poker Circuit Bicycle Casino $1,125 No-Limit Hold’em Tournament wasn’t about fame or even about fortune. Nancy simply wanted to gather enough points to help her enter the Top 100 of the GPI women’s ranking. Little did she realize that a much better outcome awaited her, because the day-time video editor walked away with the second-largest win of her career as well as her very first gold ring from the series.

Talk about turning a modest dream into a fantastic outcome; and one worth all of five figures as well as Poker’s top honors at that!

No Calling The Bluff Of The Dark Horse

The WSOP event was played over the course of two days, and 159 entrants were eager to walk away with the title and, obviously, the cash prize. The $1,000 buy-in price tag meant that ultimately, a total prize pool of $159,000 became available. This was divided into 18 payouts for the top finishers, starting at mini-cash windfalls of $2,130.

After day 1 had drawn to a close, a total of 18 players remained, all hoping to score the ultimate big one. Matson relates how after the first day had drawn to a close, she had thought that she had faired only reasonable. Then, she did well during the course of the second day, but not exactly anything anyone would write home about. But then when the final table was set, she finally started to pick up the pace. A lot of momentum and confidence was suddenly to be had and the rest, as they say, is history.

Interestingly enough, Matson is of the opinion that the fact that no one knew her at the final table, very much played out in her favour. She recalls having felt intimidated, as there were some actual WSOP big names about. She, on the other hand, became the table’s dark horse as no one really knew what to expect from her and ultimately, no one knew how to call her bluff.

Talk about a secret weapon if ever there was one around a WSOP pro-Poker table!

Towards the end of the day, it was Matson and 8 other players around the final table. Matson ended up head-to-head with celebrated WSOP champion Todd Rebello. Rebello, an old hand at the event’s tables, won his very first gold piece in the series back in 2008 and is no newcomer to the game.

But it wasn’t to be Rebello’s day; it was to be Matson’s. Rebello settled into the runner-up position, with our gunning-for-the-hundred-points lady the undisputed champion of the event.