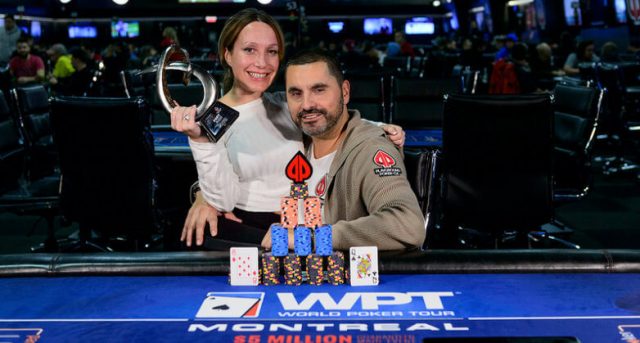 The World Poker Tour’s Montreal Main Event has just wrapped up at Canada’s Playground Poker Club. Before the tourney got underway, it was headed up by the $500 buy-in WPT500 Montreal – an event that attracted a whopping 2,536 grinders over eight flights, including one online satellite.

At the end of it all, it was local Canadian player Miguel Goncalo that stole the first-place title from French player Said El-Yousif, who won the 2016 World Series of Poker Global Casino Championship. Goncalo secured an impressive trophy and a $152,596 win for his most recent performance.

Before his new victory, Goncalo had only $18,394 in live tournament earnings under his belt. This includes his previous best of $3,746 for his second place finish during the 2017 Playground Poker Event #3: $220 NLH Freeze.

As mentioned above, Said El-Yousif came in at a close second place, taking home $105,337 for his efforts. Next up in third place was William Blais with $69,431 in prize money, followed in fourth place by Tom Hall with a $51,120 prize.

Other players that finished in the money at the WPT500 Montreal included Trevor Argue in fifth place for $38,912, Dave Graham in sixth place for $30,519, and Sebastien Lepine in seventh place for $23,652. Jason Harned secured eight place and took home $19,075, while Geoffrey Hum headed up the pack with a ninth place finish and $14,878 in prize money.

Day 3 of the WPT500 Montreal tournament saw just 35 players return to battle it out and determine a final event winner. At the time, neither of the two players at the final table were even sitting with a top-ten chip stack, but that certainly didn’t deter them from finding their way to the last leg of the tournament.

Heavy Action at the Final Table

With only seven players remaining in the running for the top prize, Lepine moved all in from his middle position holding K-Q offsuit, and El-Yousif called from the button with A-8 suited. That flop did contain an A, eliminating Lepine in seventh place. El-Yousif quickly overtook Dave Graham after he flopped middle pair against the French player’s top pair.

Goncalo received his first elimination with just four grinders remaining, which happened when recent fourth-place winner of the partypoker MILLIONS Dusk Till Dawn Tom Hall raised pre-flop, leaving Goncalo to defend his big blind. Luckily, Goncalo’s next hand contained a Q, giving him a full house and eliminating Hall from the running.

After Blais left in third place, El-Yousif had an almost 2-1 chip lead, going heads-up against Goncalo until the situation came to a head in Level 41. After a few choice moves, the Canadian raised all in for 36.9 million, and El-Yousif called off for a 22.3 million total Goncalo rolled over for a full house, and effortlessly captured the winning title for himself, setting a new lifetime winning record as well.

Do YOU have what it takes to be a winner? Play Poker online and find out