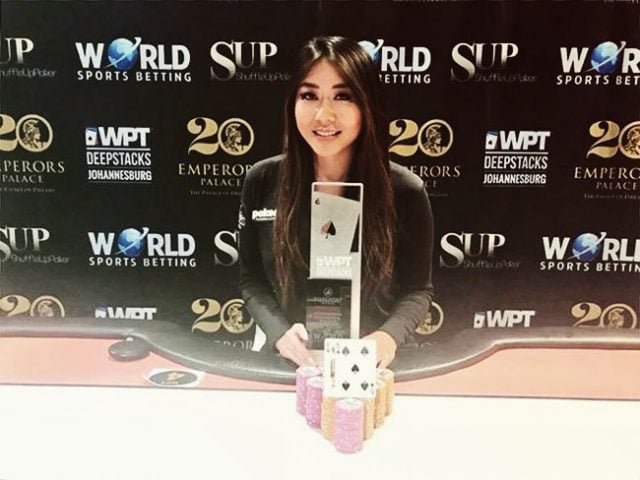 Maria Ho took down a World Poker Tour DeepStacks title in Johannesburg, South Africa, on October 14, 2018. This is her 3rd visit to the country, her 1st win on South African soil and her 3rd career title. Currently ranked 4th in the Global Poker Index’s Female Rankings, and 167th overall, she defeated a field of 387 competitors to walk away with the first prize of R1 million, or CA$92018.36.

A Guest of Shuffle Up Poker SA

Ho was a guest of Shuffle Up Poker South Africa, a professional group dedicated to facilitating world-class tournaments. Together with the World Poker Tour, the organisation has brought many talented American and European players to the African country over the years.

Recently, however, the numbers have been smaller. However, the competition was still stiff, and Ho commented that it felt good to win. The most notable competitor at her table was Jarred Solomon. The South African, who has won 1 ring and 28 cashes, finished 9th.

As well as feeling happy because she won, the setting and atmosphere seemed to put Ho in high spirits. She said that the safaris and hospitality that players are treated to in this country make the experience really special. Tablemates are also friendly and do not take beats badly, she added, which helped to make the tournament enjoyable.

The next World Poker Tour Main Event is the bestbet Bounty Scramble, on October 19 Jacksonville. But Steve Lipscomb, who founded the company in 2002, is already looking further into the future. He and his son Harry have joined forces and created Gamers.Vote.

Gamers.Vote is a collaboration between the world’s best gaming companies and players. The vision of the father-and-son team is to unite players, and persuade them to go out and cast their votes in the next United States Presidential elections.

The Lipscombs are not pushing any political agenda, but mobilizing the Poker community will bring in a lot more ballots. Pew Research estimates that half of the adult population in the United States are somehow involved in the game.

The World Poker Tour, DraftKings, Zynga, RiotGames, NBA2K, Twitch and Esports Arena are already on board as partners, and will help individuals with a simple online voting registration process. At just 15 Harry does not qualify to vote, but the younger Lipscomb has clearly inherited a sense of what is important, and a desire to get things done, from his father.

Play Poker and see if you can take the pot. Top quality games are waiting for you online!