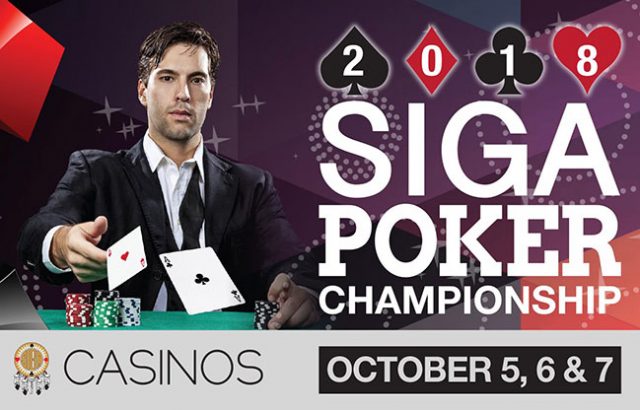 The first week of October always signifies the start of the Saskatchewan Indian Gaming Authority (SIGA) Poker Championship for Canada’s most passionate players. The premier event on SIGA’s calendar each year, the event is hosted at the Dakota Dunes Casino at the historic Whitecap First Nation, situated just south of Saskatoon.

In this year’s edition, it was Daniel Lefebvre who was crowned the ultimate winner. He managed to take down the top title, the biggest prize, the event bracelet, and claimed himself a WSOP Main Event seat for his efforts as well.

Kicking off with its inaugural event in 2011, this year has marked the seventh consecutive Championship for SIGA. Last year, a significant boost in attendance forced the tourney to expand with a second Day 1, and over both of this year’s Day 1s, a total of 380 competitors came to show off their skills.

Local Saskatoon player Trevor Norlander sat with the bulk of the chips at the end of the coveted poker event in 2017. While he did return to take a shot at the winning title once again this year, he sadly failed to gain an innings in either of the Day 1 events.

Instead, this year, it looked as though another past champ might claim the ultimate title. Chris Bowers scored his very first major win back in the 2014 edition of the SIGA Poker Championship, building up the tourney’s biggest stack by the start of Day 2. At the end of it all, Bowers claimed a tepid 23rd place, scoring $2,066 and leaving room for a brand new victor.

Joe Bohl emerged as the chip leader on Day 1a, quickly claiming the top spot on Day 2 as well. He managed to use this advantage to gather the biggest chip stack going into the final table, but eventually slipped down to a seventh place finish and claimed $5,682 for his efforts.

Naturally, Lefebvre produced the biggest story of the tournament, entering Day 2 with the third-biggest stack. He managed to bust 6 of the 10 players at the final table, holing a 9-1 chip lead over runner-up Troy Nisbet in heads up play.

Lefebvre entered the final table with the second-largest stack, but rapidly busted most of the other players, leaving only Nisbet to make it to heads-up. However, Lefebvre’s chip lead was simply too strong to overcome, leaving Nisbet with a respectable second place prize of $27,375. Lefebvre, on the other hand, walked away with a cool $37,808 in cash, pocketing a free ticket to the 2019 $10k WSOP Main Event as well.

Be a WINNER! Play online Poker and take the pot!