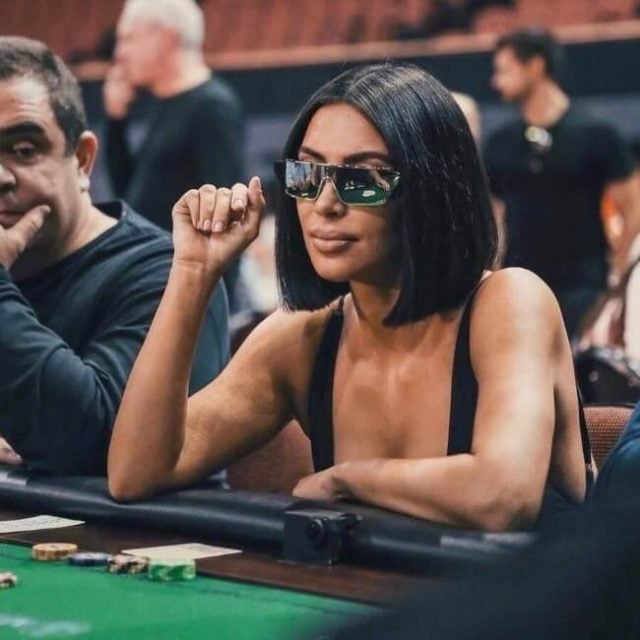 Fake news is now a major problem, and it is often hard to sort out the true from the false and the sublime from the ridiculous. A recent story about Kim Kardashian wearing mirrored sunglasses while playing Poker has made headlines on entertainment news pages and social media platforms, and is about as prime an example that we could have hoped for to illustrate a point. And actually, it isn’t even as much a news story as what it is a simple photograph. In this particular case, thanks to some very creative thinking, a picture really is worth a thousand words.

It would also not be fair game to refrain from mentioning at this particular point in the story that the image making headlines was taken at a Poker event in July of 2018. But lest we digress; the photo has somehow recently surfaced from whence it came, and the reality star is being called everything from stupid to just plain moronic as a result of it. There are even memes springing up that essentially refer to Kim as a stupid b***ch, taking the notion of poking fun at the reality TV star a little far.

But people are just naturally assuming; as they tend to do; that wearing reflective shades would position the wearer at a prominent disadvantage because of the assumption that the rest of the players around the table would be treated to a permanent sneak peek of the values of the cards in her hand.

Reality Is The Exact Opposite

If truth were to be told, Poker players rarely even bother to lift their cards from the table, or turn them over all the way. Most players merely glance at their cards before putting them back down again; face down. In fact, a hand of cards would have to be positioned at a very specific angle in order to reflect in someone’s sunglasses at all!

Many famous Poker players have in the past been caught with their mirrored glasses on, including the likes of Chip Jett, Jim Moneymaker and Phil Laak. Not too bad as far as Poker-playing company goes. Ironically enough, the only thing “real” about the entire episode is the photograph itself.

Kim really was wearing reflective sunglasses at a Poker game. And no doubt the sunglasses brand that she was endorsing is now enjoying all the extra free publicity that is coming their way!