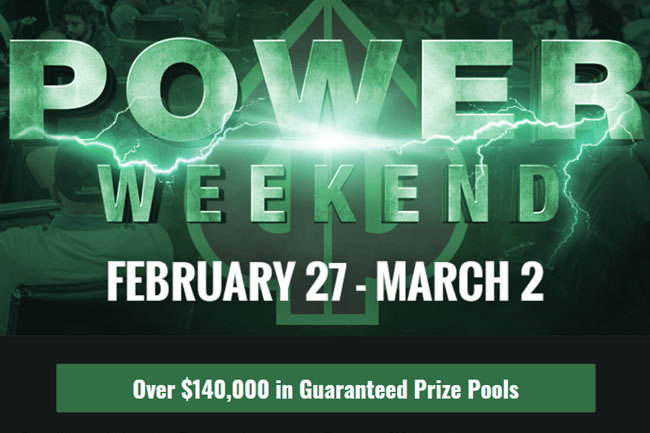 Poker is about to return to Kahnawake’s Playground Poker Casino in smash-hit kind of way and it’s all happening on February 27th when the CA$140,000 GTD Power Weekend returns to the popular Quebec venue.  The main attraction is obviously the larger-than-life cash prizes up for grabs, but it’s also something super exciting to look forward to when talking play time.

The Poker Power Weekend festival has become a popular favourite among players and what with the cash up for grabs on the weekend expected to actually exceed the CA$140k mark, it’s not at all mystery why power weekends are highlights on the annual calendar at Kahnawake.

The popular Poker festival will kick off on February 27th and run all the way through March 2nd. And what better way to be spending extended weekend time than by playing riveting Poker? The weekend’s schedule will kick off with the Playground 200 tournament. The event comes in at a CA$200 buy-in and an additional CA$20 and will kick off around 7pm on opening night.

The highlight is without a doubt the super CA$100,000 guaranteed prize pool, which is sure to ramp up the action on the weekend. This is prize money that’s in keeping with the best of ‘em and it’s all coming to Kahnawake. For players it’s all about the action and the opportunity to play and perhaps even be played. Having fun is the end-goal and made all the more fantastic an experience thanks to the guaranteed cash prize pool up for the taking.

Day 1B and Day 1C will officially get underway on February 28th, with two more staring flights available for the same buy-in fee as the first day of play. An unexpected treat is that what with this year being leap year, February 29th will make way for two additional flights of play – Day 1D and Day 1E.

Once the survivors have identified themselves and separated from the rest of the pack, the last men and women standing will get to continue on to Playground 200 Day 2, which is scheduled to this year be played on March 1. Single re-buys will be up for grabs for a guaranteed CA$5,000 prize pool on the money end of things.

The final table will be played on March 2 and all players to have made it into final seats will have their names added to the official Playground Poker Power Weekend leader board.