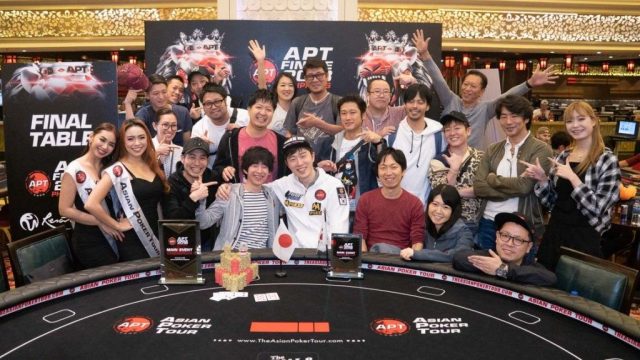 We can hardly think of a better feeling in the world than being the Poker player to have taken down a field of 307 opponents in a prestigious and world-renowned tournament. This particular honour has befallen Mikiya Kudo after he managed to make his way towards a $54,145 landslide victory by playing only 103 hands at the recent Asian Poker Tour (APT) which was hosted by Resorts World Manila and culminated in the main event having taken place on December the 2nd.

This is Kudo’s most lucrative win to date, with all of this other winnings well under the four-digit mark. The Japanese player had been dead set on picking up his first major title right from the start, and by the time he and 7 other players had made it into the main event, Kudo held in excess of 500,000 chips more than his closest coPimpetitor, former APT winner Lim Yohwan.

Winning Was No Easy Road

Kudo had been working his Poker magic throughout the entire tour and ultimate pay-off for these efforts was to go head to head with a worthy opponent such as Yohwan. It wasn’t easy pickings all the way. In fact, it wasn’t easy pickings at any stage during the tournament. Kudo had survived a couple of close calls in the way of less than favourable hands having been dealt to him.

He however did what many professional Poker players had one before him by sticking to his strategies and mixing it up in order to adapt where necessary. Ultimately a few solid hands put him back into the runnings for the big win and the honoured the favourable hands of destiny by answering to the call and playing his hands in the most lucrative of ways.

The final hand of the main event proved to be the most exciting of all, and let it never be said that this particular tournament did not end on the ultimate high note. The card-yielding action culminated in what can be described as a race of Aces. Lim Yohwan had a hand consisting of A-Q and opted to go for pushing it all in. Never one to shy away from a challenge, our Japanese hero went all in with his A-3. Kudo’s bravery was awarded in the way of a 5-high straight.

The Asian Poker Tournament has been a popular event on the annual Poker calendar since it was introduced back in 2008. The tour is expected to expand even further and will next year include stops in Japan as well as Taiwan.