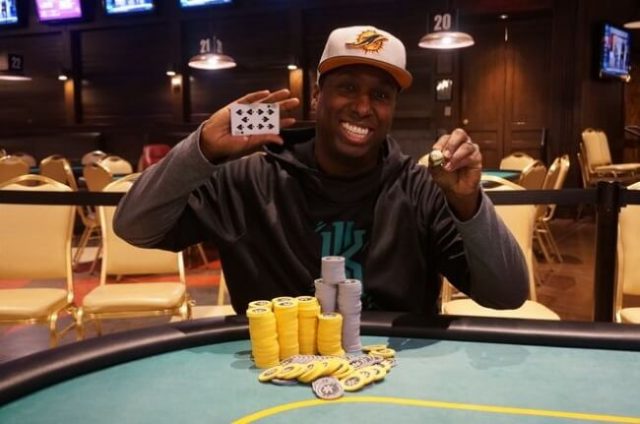 Pro-poker champ Maurice Hawkins is a man with a plan. Hawkins recently walked away $44,297 the richer after he out-played, outwitted and outlasted 319 of his contemporaries at the 2019 World Series of Poker Circuit Harra’s Cherokee $600 No-Limit Hold’em Big Blind Ante event. Quite the mouthful, but then again, Hawkins did also manage to walk away with another very special award under his celebrated belt: his 12th WSOP ring.

Thanks to Hawkins’ sterling resolve to keep on going when the going got tough, he has now officially moved into a tie-position with Valentin Vornicu for the most titles won on the WSOP circuit. Hawkins is already the all-time earnings leader, having so far secured a smashing $1,668,698 slice of the WSOP tour prize money pie.

Reclaiming His Spot As Winner

Hawkins said after the tournament that even better than having won a lot of money, and even more special than having secured his 12th gold ring, was the fact that after having secured a couple of thirds and seconds over the past few months, he had finally managed to move back into the winner’s seat. The Poker-pro said that this was more valuable than money or a ring of gold.

Hawkins said that it was important to win because he never considered himself a second- or third-place player to start with. He’s a winner and he likes to keep it that way. Judging by how he played in the latest stint, it would be safe to assume that this won’t be his last chance at occupying the number one seat. His playing style was spot on and his strategy without flaws.

Looking Ahead To The Future

Now it’s time to look to the future, says Hawkins. And it promises to be a bright one indeed since his latest win has ensured that he now occupies the number 69 position on the overall POY leaderboard. In addition to the prize money and the coveted gold ring, Hawkins was also awarded 300 Player of the Year points. Many a player regards winning the title of Player of the Year the ultimate honour; even more so than gold rings or gold bracelets. Here’s to many more points in favour of Maurice Hawkins.

Got what it takes to WIN? Play Poker online at Canada’s top rated sites TODAY!