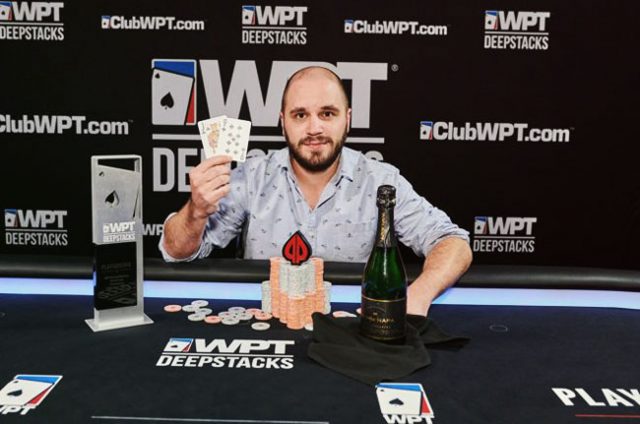 Poker player Martin Gaudreault-Remillard is just as full of swag as his name suggests. The player, who has to date only racked up one other tournament score, has won the CA$1,650 buy-in WPT Deep Stacks Montreal Main Event at the Playground Poker Club.

In order to do so, Gaudreault-Remillard had to conquer a field of 682 participants. The effort was without a doubt worth every drop of concentration, and Martin walked away with CA$182,790 safely tucked into his back pocket, as well a free and guaranteed entry into the WPT DeepStacks Championship; a prize valued at a cool CA$3,000.

Only His Second Tournament Win

Martin spoke briefly to the press after having won the tournament, and said that the fact that he did not play in too many tournaments made the victory all the sweeter. On Day 2, only 9 players remained. The table was populated by a bunch of fairly ordinary players, with the exception of Karim Kamal who had in 2018, won the Partypoker No Limit Hold’em MILLIONS OPEN in April of that year.

As for the rest of the players, it looked something like this:

Quite surprisingly, Martin Gaudreault-Remillard had started out the day by ranking somewhere very near average on the list.

But this would soon change.

Gaudreault-Remillard recalls how he had held a weird stack in a weird position, and that whilst everyone else was gunning it hard at an attempt to get rid of the competition, he had decided to just let all of the weirdness ride out.

In the end, this approach proved really effective, and most probably contributed to Martin’s having won the tournament, in a significant way.

When it was finally down to the last two men standing (or sitting, if you wish), it was Martin Gaudreault-Remillard and Julio Cacoilo battling it out for the 1st place position.

And by now, there’s no need to explain how that turned out!

Get the best Poker action online. Play for the pot TODAY!