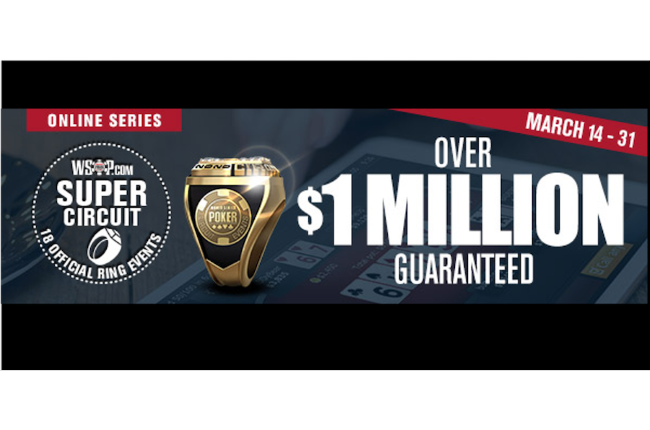 A little over two weeks ago the World Series of Poker launched its own tailor-made response to covid-19 and a global lockdown: an 18-ring online series consisting of as many events for all online players residing within the borders of Nevada, Delaware and New Jersey. Online Poker is legal in all 3 states, so the events are 100% lawful. The WSOP.com Online Super Circuit Series offers to competitors prize pool guarantees well in excess of the $1 million mark – with all 18 events acting as point-accumulators for the Global Casino Championship leaderboard standings.

The online championship series will run all the way through March 31st and on Saturday past reached Event #15: $75,000 GTD NLH 2x Re-entry. The event featured a buy-in of $320 as well as a prize-pool more than 3 times the size of originally announced prize-guarantee. The player-pool eventually grew to a stunning field of 473 registered players, boosted by 258 re-buys and an overall pool of $219,300 in cold hard cash up for the grabs.

The champion of the day and the proclaimed master of Event #15? None other than the infamous and highly-liked Andrew “DrDisRespect” Dean himself.

It would obviously be unfair not to make mention of the very first winner of the series. Event #1: $50,000 GTD NLH Double Stack 2x Re-entry attracted a 409-strong registered player field, supported by 161 re-buys and a total prize pool of a cool $171,000 in red-hot prize money. Each player appeared more resolved that the next to stake claim to the $41,895 in first-place prize money but it the end it was “Eclypzed” who emerged the ultimate online Poker victor.

Some well-known names on the circuit competed for the first-place prize money, including Poker-pro Kathy “Luckygal” Liebert and fellow pro-master Dan “chard” Martin. That the competition must have been super-tight isn’t at all in dispute. Sadly, some pretty big names fell short of Event #1 prize money. Ryan “potential” Laplante, David “dwpoker” Williams and even our own Daniel “DNegs” Negreanu all fell short of both cash and glory.

When the World Series of Poker first announced its online series championship tournament (and with 18 rings up for grabs!) the news was welcomed by the Poker community. The WSOP had earlier on cancelled each of its stops for the year following the Coronavirus outbreak and subsequently, many career players were left in the lurch with nowhere to go but home.

And home is where they went, but thanks to the WSOP, not without the opportunity to get back in pocket on the online circuit. The fact that rings as well as leaderboard points were up for grabs only added to the gratitude and to the excitement.

Many unlucky players not residing in any of the 3 states in which online Poker is legal, have in the meantime again bemoaned the refusal by local lawmakers to legalise the game in more U.S. States. Online games and championships are fast becoming a welcome beacon of hope as the U.S. continues in a state of lockdown due to the global pandemic. Digital transformation will ensure the future not only of the industry, but of the many players who play not only for fun, but also professionally.

Why did the WSOP launch the Online Super Circuit Series?

Due to Covid-19 many land-based Poker events were cancelled, so WSOP took the action online.

Which pro Poker players have been playing in the Online Super Circuit Series?

What are the WSOP.com Online Super Circuit Series prize guarantees?

In excess of $1 million.

Why is the Online Super Circuit Series only available in 3 US states?

Online Poker is legal in Nevada, Delaware and New Jersey.