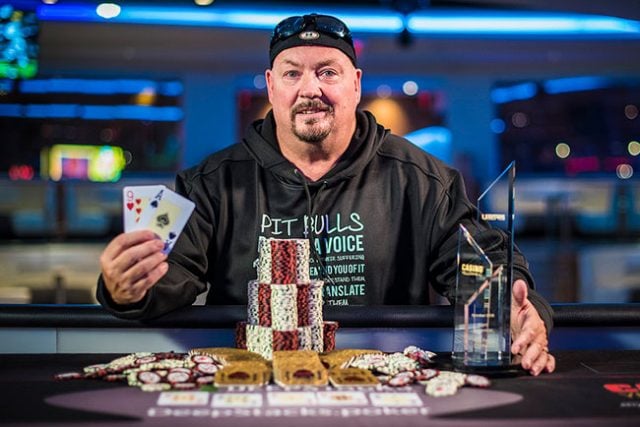 The DeepStacks Poker Tour (DSPT) in Edmonton was packed with action this year, playing out at Casino Yellowhead from September 29 all the way through to October 8. Over the course of the 10-day tourney, seven events played out, including one team tournament and another fun-filled pot-limit Omaha event.

The biggest prize however, as per usual, was the $1,100 main event – and this time, it was local player Dean Walsh who nabbed his first big live win, along with his largest ever cash, in the marquee game.

The series began on September 28 with the first of two Day 1 events. 288 entrants signed up in total for the $660 buy-in event, and once everyone had played their hearts out, it was Yiuri Zhang with the bulk of the chips. Zhang managed to defeat Tony Comely in heads-up play for his very first DSPT title and almost $29,000 in prize cash.

Hundreds of Players Battle It Out

The $440 PLO also ran alongside the final day of the tourney this year. 120 players entered this event, and the final prize ended up being fought for by Phil Riley of Saskatchewan and Sheraz Nasir of Edmonton. Nasir claimed the first place jackpot for $13,450, hitting an incredible lifetime earning record of more than $430,000.

Players who were looking for a more affordable buy-in flocked to the $330 no-limit Hold’em Event 3, which attracted 263 entries and created a prize pool of $74,955. At the end of it all, it was Ryan Comely who beat his brother Tony’s second place Event 1 finish, winning Event 3 outright with a resounding chip lead against Mohammed Alanelgada. He took home $17,095 for his victory.

Event 4 came as a once-off Seniors event with a $330 buy-in. This buy-in included a $50 bounty, and it was Joe Herlein who eventually beat the other 64 players on the day for a prize of $5,345. Event 5 was a Ladies tourney, offering a buy-in of $220 and a $2,650 top prize that was eventually taken down by Bernice McLennan, with Betty Brown in close second place.

Last but definitely not least, the $1,100 Main Event boasted three Day 1 starting games that attracted 387 entries and created a prize pool that exceeded the $300,000 guarantee by $64,200. At the end of it all, it was Dean Walsh who was still standing, winning heads-up against Tyler St Clair and pocketing $75,540. This was both his first major win and his largest live cash to date.

The cards will soon be in the air once more for the next DeepStacks event in Alberta, Calgary. The DSPT Championship 2018 will run from November 22 to December 3 at the Grey Eagle Resort and Casino in Calgary later this year.

Do YOU want to win big? Play Poker online NOW!