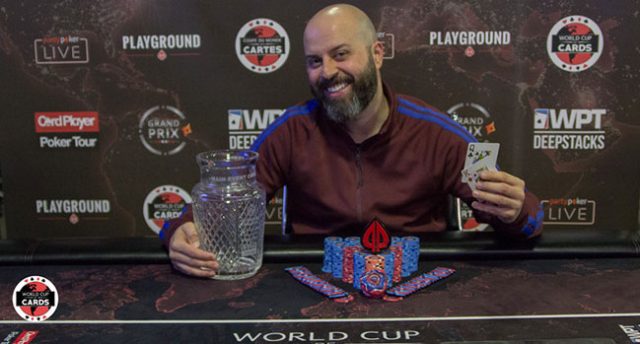 The 2019 Card Player Poker Tour World Cup of Cards draw 317 entries, and Danny Ibrahim ran circles around each and every one of the entrants. Three days was all that it took for the Ottawa, Ontario pro-player to secure the ultimate $1,100 no-limit Hold’em victory as well as the awesome cash prize of CAD$48,070 (roughly USD$36,533).

READ MORE: New Book Focuses On The Dark Side Of Pro-Poker

A Climb From The Bottom Up

Ibrahim had entered the second day in 7th overall chip position, with 24 players to beat in order to make it all the way to the big money. The final table proved to be a nerve-wrecking affair, but thanks to having picked up pocket nines, he made it past Patrick Braga’s pocket eights. Ibrahim then proceeded to finish off Braga by scoring his very first knockout. Once Braga had been knocked out of the final five, the remaining four players made the decision to split the prize pot based on performance up until that point.

Of the awesome foursome, Amir Babakhani was the first one out. Ibrahim’s hand was stronger, and this resulted in Babakhani having been knocked out in fourth place. Next up to be eliminated was former chip-leader Luigi Fantigrossi, which left only Ibrahim and Michael McKinnon seated at the final table.

Things had suddenly turned serious, but our man was obviously up for the challenge.

The stage was set and the final heads-up commenced. Despite the fact that Michael McKinnon had been drawing on the short straw of a shorter stack for much of the time leading up to the final table, he still managed to survive the final two players to have been knocked from the table.

But in the end, it was Ibrahim who had managed to divide and conquer and claim his trophy and his prize. McKinnon did not leave with nothing, and was at least able to pocket the earlier agreed-on $28,600 share of the pool.

When asked what they prefer, most top pro-Poker players will opt in for the winner’s position and rank-points, instead of the largest amount of cash. This is because the more points that are scored on the leader board, the more guaranteed entries into major annual tournaments are in the bag.

Play for the pot online! Discover a great variety of Poker games NOW.