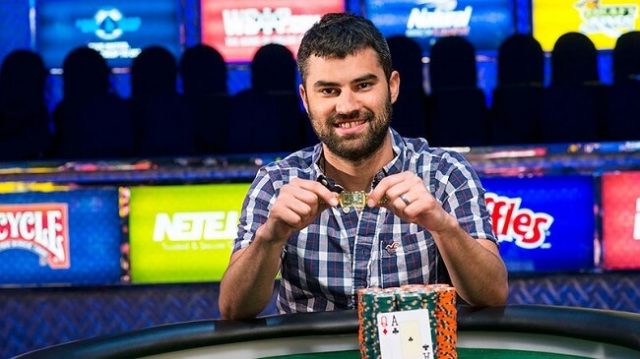 Having the golden touch, often referred to as the King Midas effect, can be both a blessing as well as a curse. Just ask World Series of Poker bracelet winner Kyle Cartwright. The expectation for a win is always there, and onlookers are noticeably surprised when it doesn’t happen. But Poker’s own King Midas most probably knows that its only a matter of time before the magic is reclaimed, because he always returns to the felt and without exception, makes a superb come-back.

And this is exactly what had happened last week during the $1,700 NLHE main event at the Rio in Las Vegas. Cartwright had managed to finish in 11th place at the mentioned event, and left with a $11,913 wad of cash in his pocket. Then he gave the $2,200 NHLE high roller event a go, but had to take his leave even before having reached the prize money.

It was at this point that Poker’s own King Midas had reclaimed his golden touch.

After having been ousted to the curb resulting from a bad hand and strong competitors, Cartwright sat down to a game of every player’s pet favourite go-to when the going has gotten tough: a Video Poker machine.

Our champ, now already some in the money thanks to the first NHLE win, was playing five credits to a game. What this meant that every time a deal was requested, Cartwright was putting down $25 to a line. Well, needless to say, his small investment soon paid off in a very big way because King Midas very soon managed to do what 649,739 other players would not have on that particular day; he scored a Royal Flush playing straight Poker.

The odds of that happening? 649,40/1. But that’s not all – this wasn’t Cartwright’s first Royal Flush ever. It was his fifth.

His first four had all been recorded during the summer of 2017; with three of the four all having been Heart flushes. Each time our man had struck gold, it had resulted in winnings ranging anywhere from $100,000 all the way up to $500,000; obviously because of the size of the bet that he had been playing at the time. And coupled, of course, with a healthy dose of King Midas-style Kyle Cartwright magic.

Do YOU have the magic touch? Play Poker online and find out!