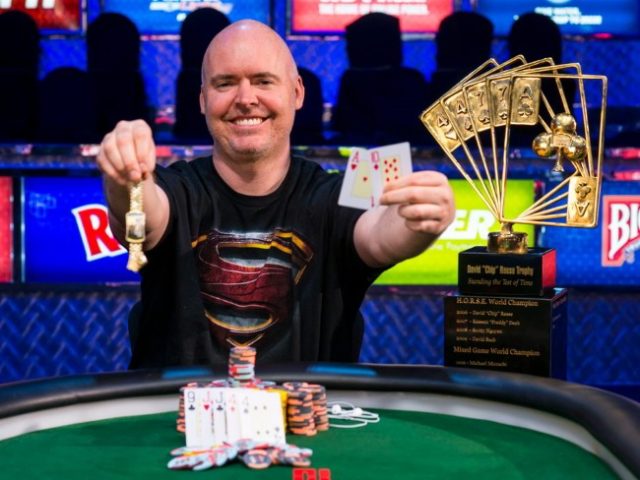 John Hennigan is no newcomer to the worldwide Poker scene. In fact, the latest WSOP champion is now the holder of a smashing total of 6 World Series of Poker bracelets. Oh and he also got to leave with $245,451 tucked safely into the pocket of his trousers thanks to having won the $10,000 Seven Card Stud Championship (event #144).

So what does it feel like having won a 6th bracelet? Nothing like the other 5, came Hennigan’s unexpected response. According to the player regarded by many as being one of the best; if not the best of all; Seven Card Stud players in the world, lucky number 6 holds a special place in his heart because of his having earned it whilst playing a game that he enjoys more than any other style of Poker.

They Were Quick On The Draw

David Singer; holder of two bracelets; followed Chris Tryba out the door. Tryba placed 6th overall, and Singer ended up finishing up in the 5th position on the World Champion Seven Stud ladder. Two hours lapsed before Mickail Semin was no longer able to hold on. Semin finished in 4th overall position. A mere 4 minutes later it was David Baker’s turn to pack his things and go. At least finishing off in 3rd place meant a not-too-shabby $104,416 paycheck for his efforts.

When Winning Is Meaningful

Once Baker had taken his leave, it came down to the final two: John Hennigan vs. Daniel Negreanu. Hennigan, never shy when it comes to pulling out all of the stops, commenced the final round of action with a heads up worth $1.5 million. Interestingly enough, this constituted about 40% of Negreanu’s total kitty.

Hennigan soon found his final-duo mojo and at one stage it appeared as if Negreanu would have not even a semblance of a fighting chance against the Stud-champ. Which, ultimately, it turns out that he did not in anyway. For the moment however, a recovery appeared imminent. The relief was evident on Negreanu’s face. Sadly, that did not last as Hennigan soon pulled the kind of smooth moves that proved why he was the better player of the two.

Hennigan during his post-tournament interview described his victory as a truly “sentimental win”.

Playing Poker online has never been easier. Enjoy playing on desktop AND mobile!