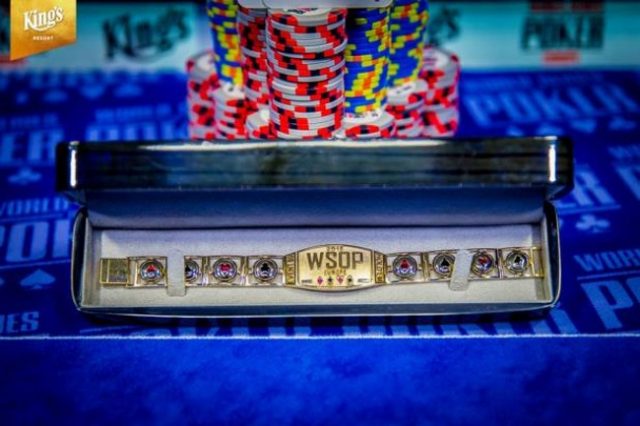 Kahle Burns has joined a rare and exclusive band of Poker elite by wining not one, but two, WSOP bracelets in a single week. He achieved this mighty feat by closing the deal on two WSOP wins in a single series. This has had the effect of bumping Burns all the way up and into 6th position on the Player of the Year scoreboard.

The piece de resistance for Burns ended up being the €2,500 buy-in Short Deck event. And even more of an achievement is the fact that the champion player was by no means up against small-fry competition either.

A League Of Champions

Fellow Player of the Year hopefuls Daniel Negreanu, Robert Campbell and Shaun Deeb joined Burns in the tournament. Kid Poker was immediately up on the hinds of his feet having been pitted against arc-rival and much-detested enemy Shaun Deeb. But the resolve on Kid Poker’s end of things did not light big enough of a flint to strip our man Burns of any of his own resolve to emerge the victor on the other end of the play.

The final table belonged to Burns right from the get-go and the Poker lock-jaw didn’t for one second lose a grip on his deadly bite, leaving precious little room for anyone else to try and lay claim to a win. Seven players had started out as part of the final pack, but Burns made right damn sure that he held on to the idea of another bracelet trophy around his Poker-playing wrist. It was ultimately this determination that made for the clinching of the deal; something that was tangibly evident right from the start. Which of course made it all the more nail-biting to look on as the process of annihilation of the weakest got underway.

Heads up ended up being a standoff between Burns and German player Manig Loeser. Loeser however turned out to be no match for the determined play put to table by his opponent. Burns eventually showed Loeser the door as well as where to get off the Poker wagon, and the latter ultimately became the victim of pure resolve on the part of a fellow player.

At least now when someone asks the question to trump all other questions, Burns will be pushing his chest out wide and answering in the affirmative. Because everyone knows that despite total career winnings, antics at the table and Poker fame, the only question that really matters is this: but have you won a bracelet?

Play Poker online. Know when to Hold’em and when to Fold’em to WIN!