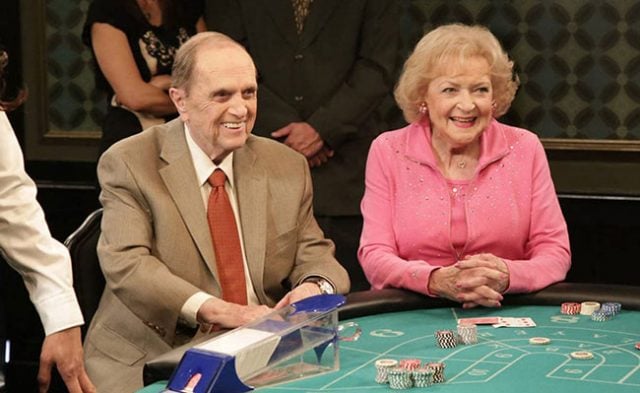 There’s nothing better than an iconic celebrity and an equally iconic gambling game coming together in perfect harmony. That is exactly what happened on January 17, when legendary US actress Betty White celebrated her 97th birthday with friends and a few impassioned rounds of poker.

Sources close to the celeb revealed to TMZ what White used the special occasion to meet up with some of her close friends on the night and get stuck into a fun-filled card game of stud. Apparently, the actress’s poker friends and herself go way back too, as she has been dealing and scoring with them for many decades now.

Focusing on the Positive

Of course, Betty’s choice has come as no surprise to her fans. The only surviving member of the Golden Girls clan recently joked that she credits her long life to a diet of vodka and hot dogs, so it’s no wonder that poker was also on her list of firm favorites.

As for her secrets to staying happy and healthy for almost a century, White has urged her fans to enjoy life, and to accentuate the positive rather than the negative. Instead of singling out something to complain about, she says, rather find the silver lining in any situation. It’s not hard to find inspiring stuff, she claims, if you look hard enough.

The poker-grinding actress was born in 1922 in Oak Park, Illinois. She later moved to California with her family when she was a child. She began her career in television in the late 1930s after trying unsuccessfully in her twenties to break into the industry. First, she was turned away for being “unphotogenic”, but that did not deter her in the slightest.

A Long History of Having Fun

After starring in Life With Elizabeth in the 50s, she began to appear in game shows, talk shows and variety specials, not to mention the Mary Tyler Moore Show. Her sharp wit and helpful tips made her an instant hit, and she was quick to win two Emmy Awards for her work in the series.

Next up for White was Golden Girls in the 1980s, where she played the sweetly naive Rose Nyland alongside Bea Arthur, Estelle Getty and Rue McClanahan. She still maintains that the cast had great fun together; all while proving that life doesn’t simply stop once you turn 60. It was a special experience for the almost centenarian, in her own words.

Nowadays, Betty spends her days enjoying her older age, socializing, making the odd TV appearance, and playing poker, of course! When asked about how she wants to be remembered, she simply said, “Warmly.” The iconic actress hopes that people will remember something funny when they think of her, and perhaps even have a laugh in her honor.

Looking for the best Poker games online?
Canada’s top sites have them ALL!