Annie Duke On Why Poker Is A Lot Like Business 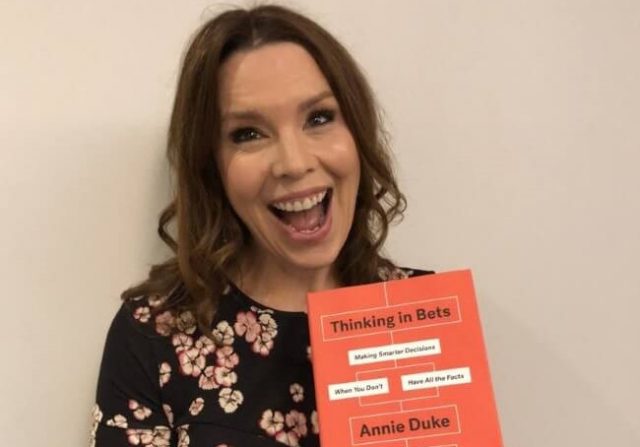 Annie Duke, Duchess of Poker, despite her professed dislike in the nickname, is pure blue-blooded royalty to the industry.  Duke followed a truly diverse career-path in that her original ambition involved a whole lot of PhD and precious little card playing. Somewhere along the line, however, a left turn had been scribbled in by the hand of destiny, and as Duke sat about waiting for a faculty appointment and at the same time looking to make a bit of extra cash, she decided to try her own hand at playing Poker.

Duke instantly discovered that she did not only love the game, but she also appeared to be rather good at it, as attested to by the fact that she went on to win more than $4 million playing tournaments. To top it all off, she won the 2004 World Series of Poker Tournament of Champions as well as the National Heads-Up Poker Championship in 2010.

Duke was, for all practical purposes, one of Poker’s own.

Read More… Poker’s Ronnie Bardah May Be Next Survivor

But Duke discovered another talent along the way. Despite her having originally worked towards a career in cognitive psychology, she soon discovered that she had strong business acumen about her too. And surprisingly enough, this had much more to do with the skills that she had picked up playing cards than with anything else.

Duke puts this down to the fact that there are many similarities between the decisions made in Poker and the decisions made in business. The decisions in business as well as in Poker, explains the player, all come down to betting on an outcome. In business, similar to what goes on at the table, nothing is guaranteed. The trick is to develop a keen sense of balancing the risks with the size of the bet.

The player has written a book about the subject too, called Thinking in Bets: Making Smarter Decisions When You Don’t Have All the Facts. In the book, Duke draws an analogy between how we as human beings process information, learn and become familiar with the types of decisions that end up in good and not-so-good results, and with the types of decisions made in Poker.

But what, according to Duke, is the most common problem crippling both sides of the spectrum? The answer is simple, according to Duke: allowing the perceived perceptions and biases of others to influence one’s own performance.

Words to live by; in Poker as well as in business.

Ready to place YOUR bets? Play Poker online and see if YOU can win big.