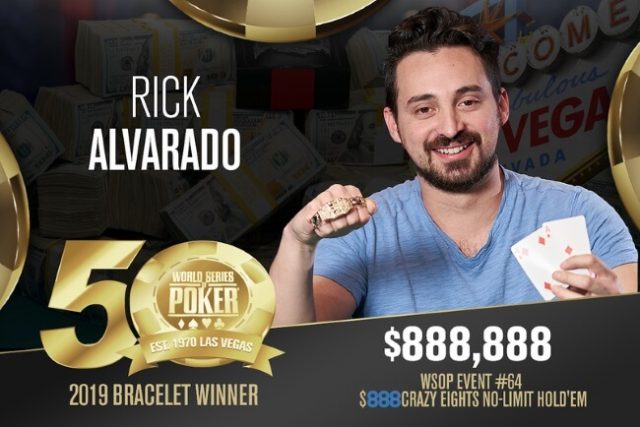 As honourable as what an honest day’s work may be, whether its flipping burgers at a local fast-food joint or performing open-heart surgery, winning a gold bracelet and a load of cash still beats it all. Especially if your name is Rick Alvarado, who happened to fall into the fast-food category prior to his big break at a recent WSOP $888 buy-in Crazy Eights event.

The California Poker-pro played his way all the way to the stunning $888,888 in first-prize money over the course of 4 days’ worth of unforgiving card-swinging action. But more than the money, what seemed to have made Alvarado happier than anything, is the fact that his mother was there to witness his very first gold bracelet win. And it very nearly didn’t happen at all because Alvarado’s mom arrived with only minutes to spare, and saw only two or three of the final hands being played. She had been late to arrive and literally had to break into a run at the airport so as to be on time to catch her flight. She was then collected by a friend of Alvarado and escorted to the venue where her son the Poker-pro was about to make WSOP history.

And what a historical event it was. The vast field of entries ended up numbering 10,185. This bode well right from the start as what it came down to was that the event’s top-performing players would ultimately go home with combined guaranteed prize money to the tune of $8,139,852.

As for Alvarado, he just wanted to win, and he wanted it badly. There were a couple of close calls and it certainly wasn’t easy sailing all the way. But all’s well that ends well and most of the crazy twists in the plot just so happened to work in the winner’s favour.

The Final Head To Head

In the end it came down to Alvarado vs. Canadian Poker-pro and two-time WSOP gold bracelet winner Mark Radoja. Let it not be said that Radoja was a pushover victory, because that wasn’t the case at all.

A little bit of luck on one of the final draws eventually bagged the tournament for the former fast-food worker. Radoja didn’t leave empty handed either. His runner-up position was worth a splendid $548,888 in Crazy Eight prize money.

Do YOU have what it takes to win BIG? Try your hand at Poker ONLINE!