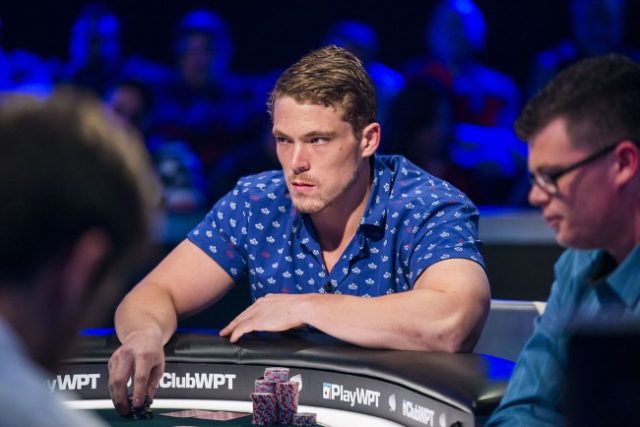 Former Footballer and current professional Poker player Alex Foxen won the 2019 Five Diamond World Poker Classic Main Event of the World Poker Tour (WPT). This is Foxen’s first WPT title, as well as his biggest career win to date, and his victory put him in the lead position for the Global Poker Index Player of the Year (GPI POY).

Foxen’s lead didn’t let up, and he and girlfriend Kristen Bicknell won this year’s POY and Female POY respectively. He nabbed the coveted award in 2018 too, making him the first-ever player to win two years in a row.

The Five Diamond Classic is one of the WPT’s few remaining $10,000 buy-in events, and allows unlimited re-entries until the start of Level Twelve. The tournament’s appeal always draws a large crowd, but this year it reached its biggest-ever numbers.

No less than 1,035 players competed, growing the prize pool to just over $10 million. The top payout that Foxen walked away with was almost $1,7 million. As well as this incredible payout, the win also earned him a $15,000 seat in the WPT Tournament of Champions, which will close the season.

The final table’s most important hand is not often seen early in the game, but in this case it might have come as soon as the twenty-ninth hand. Foxen had entered the six-handed table second in chips, with 9,750 million to Danny Park’s 11,100 million.

Once Foxen had the advantage, he never let go and didn’t look back. As he entered heads-up play with 29,500 million chips his edge over Toby Joyce’s 11,900 million was significant. By that point, Joyce would have needed a double up to remain a serious contender. Instead Foxen pulled away further, and sewed up the tournament in just nine hands.

Foxen almost won the Five Diamond Classic in 2017, losing the title to Ryan Tosoc. This no doubt made his recent victory, which he described as “amazing” and “surreal” feel even better. He explained that he’d been disappointed in how he played heads-up in 2017, so getting the opportunity to play again and rectify past mistakes was very satisfying.

Play against Poker pros ONLINE! See if YOU can WIN big now.