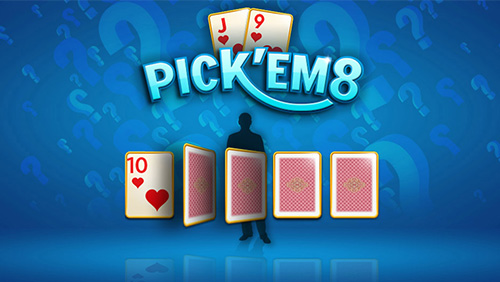 The pre-release information, in the style of any pre-release information worth its salt, has leaked before its official release. 888 Poker, according to mentioned leaked pre-release, will soon be unleashing Pick’em8 into the ether. A solid mix between Poker and typical casino games mechanics, Pick’em8 is all about playing Poker in a non-labour intensive kind of way. Which is just fancy-talk for playing Poker on autopilot. The kind that we all prefer at times; ideal for those lazy Sunday afternoon sessions.

With Pick’em8, there are no individual opponents. It’s you against the house. That’s it. Starting out, two cards must be picked. But be warned, this is a race against the clock. Fail to pick your two, and the machine will pick for you. The machine will then to pick an automatic flop, river and turn, and all participating hands will share in the prize-pool.

As easy as pie. Or should we say, as easy as slots?

Your Very Own Shot Clock

And then there’s 888’s Shot Clock. The Shot Clock was introduced by 888 at all main events ever since January 2018 rolled around, with 888 being the only operator to have done this so far. Now, in the spirit of bringing things home, the casino group has developed a downloadable, digital version of Shot Clock.

Home games always have a tendency to suffer from some Poker-ailment or the other, and let’s be frank; it leaves one with a creeping suspicion that something must be done to return the game to its classic state. And yet, no one seems to want the job. A bit like reading the rules of a board game and doing the opposite, regardless.

Well, thanks to the ingenious ways of the masterminds at 888, we’ve just moved one step closer to reclaiming the essence of everyone’s favourite card game. The rules, after all, are what the game is all about.

And timing is everything.

More Than Just A Birthday

There has also been another cause for celebration, this time in the way of a birthday. But 888Poker ambassador Parker Talbot isn’t only celebrating his birthday; he is also doing so in true Poker style. Talbot is currently edging ever closer to the top of the ranks at this year’s PokerStars European Poker Tour, which is currently being played in Prague.

The big money? $1 million at the top.

Are you an avid Poker player? Play for the pot at top sites online NOW!