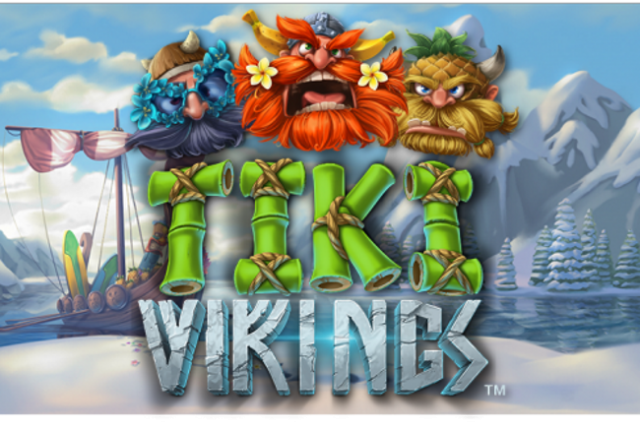 Even Vikings need a tropical island vacation away from the shackles of a standard workweek every once in a while. Just ask a band of Tiki Vikings, created as a Microgaming-exclusive by independent development house Just For The Win (JFTW). This is the same team of creative geniuses to whom we owe the pleasure of slots like Ruby Casino Queen, Shogun of Time and Rockabilly Wolves.

Players get to catch up with the Tiki Vikings upon their return from a well-deserved island-style getaway. They’re ramped up from pillaging pineapples and palms and are eager to deck the halls with all things Hawaii upon their return to native Norse.

The merriment plays out on 5 reels and 20 pay lines.

The Tiki band of bearded brothers is present on the reels all throughout. They are unique in their appearance and the symbols create the distinct idea that the characters are in fact hand-painted. Now eloquent by nature, having been refined by the sweet and guilty pleasures of island-life, the Vikings have gone all out by decking out the reels with flowers, coconuts, tropical fruit, and more.

But it’s not only the Vikings who are having fun. There’s much joy laying in wait on the reels for players too. A winning line consisting of any of the top-paying symbols will instantly trigger the Symbol Lock Re-Spin feature into motion. The bearded men will remain locked into their original positions on the reels for an additional spin, and each additional high-paying symbol landed will award one more re-spin.

Players will also notice the presence of a symbol-upgrade metre that is located to the side of the reels. Each symbol frozen in place on the slot’s reels will serve to fill the special meter. As soon as three consecutive spins are the makings of symbols frozen on the spot, the metre is full up and ready to do its magic because it’s at this point that the Symbol Upgrade feature jolts into motion.

Each transformed symbol is at this point completely overhauled and magically transformed yet again into the next-highest paying symbol, depending of course on the value of the original symbol landed. This, according to Microgaming’s official game release, is where the party starts to really heat up. The ultimate goal is a full reel blackout and thanks to JFTW, this is no impossible feat.

Tiki Vikings is now live at all Microgaming-powered casinos and can be enjoyed on desktop and mobile.